The Female of the Species!

The Boys themed workouts have been doing so well I just had to keep them going this week.

We also even saw Karl Urban, Chace Crawford and Jennifer Esposito’s workout and diets prior to the show airing, who star as Billy Butcher, The Deep and Agent Raynor!

Now it’s time to hit both sides of the fence again this week.

That means we have both A-Train and The Female [of the Species]!

I also thought it was fitting these two go together for their little rendezvous in the show.

We’re back to not-so-specific height and weights for The Boys characters.

But at least we have his celeb portrayal to help us a bit.

The Female Diet and Nutrition

This is where I get to break down the “how” and “why” of the workout we’re going to build based on the characters, in this case The Female’s, powers and/or abilities.

But, like A-Train, I think it’s appropriate we start with a bio for The Female.

And, as you’ll soon see, very much unlike A-Train’s short list of powers, The Female is one strong chick!

ComicVine tells us this about The Female [of the Species]:

The Female (Of The Species) is a member of The Boys and she acts as the “muscle” of the team together with The Frenchman. This muted Japanese girl possesses superhuman strength that can rip someone’s skin and limbs off. Although she appears to be ruthless and cruel to her enemies, The Female is a good person and she is The Frenchman’s best friend. According to Mother’s Milk, The Female was exposed to Compound V as a baby and it is implied that at this time some other things happened to her that contributed to her mental problems. The Female has an uncontrollable urge to kill and at times when she does not kill enough in her capacity as a member of The Boys she takes jobs with the local Mafia. Frenchman has tried to help her overcome this compulsion, with limited success.

Alright, so keep in mind I’m not going to be training you to be this ruthless, but we will need you to be as effective (if that makes any sense).

Keep in mind I did enjoy the fact that this was a much longer list than A-Train’s and could have easily used the list from her Wiki Fandom which listed “hand to hand combat, Superhuman Strength, and Superhuman Durability” as her powers.

But this one is much cooler, and honestly seems to be more on par with what we saw in the show.

And I also like the fact that they added “feral”.

As an added bonus I wanted to share a little more of a bio for her, showing that she’s not only a badass female presence, but more:

According to CIA records, The Female’s tongue has been removed, presumably causing her muteness. It is not clear whether someone else or The Female herself is responsible for the removal. However, following Hughie’s revelation of a potential superhuman genocide by Butcher, it was revealed that she does have the ability to speak when she said, “I hate mean people.” The Female’s main power is her immense strength, as she regularly tears even super humans apart. She also has a talent for finding the weak spots on people.

So we’ll focus in on strength gain for this one, but make sure we’re still lean and quick in the process.

Think you can handle that?

We’re going to be training upper, lower, and full body splits with this one to combine an effective strength gain approach with one that will get our stamina and fat loss where they need to be!  You’ll have the option to train utilizing two sample training schedules.

The Female Workout Upper Body A:

The Female Workout Upper Body B:

The Female Workout Lower Body A:

The Female Workout Lower Body B: 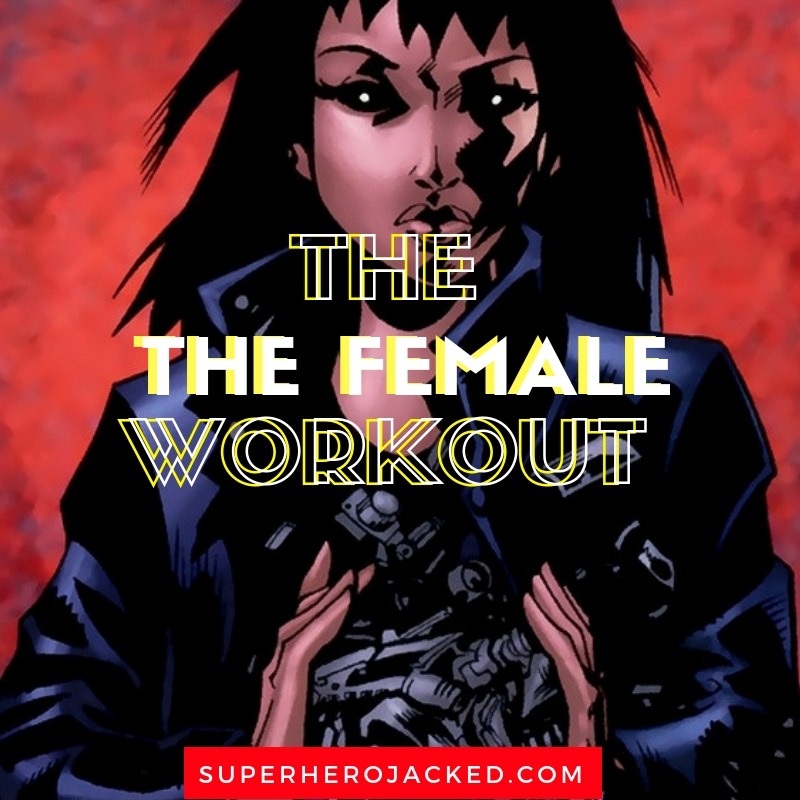 Download The FREE The Female (The Boys) Workout Routine PDF