We’ve now seen over 250 celebrity workouts and diets researched and shared at SHJ.

In that time, there’s a handful that stand out.

While some routines have the numbers from the celebrities specific fan-base, there are others that just overwhelm the group by bringing thousands of new members of The SHJ Army to try their routine.

These are our Top 10 Male Celeb Workout routines, as chosen by The SHJ Army.

Our top workouts EVER downloaded and utilized.

And, every single one of these is now capable of being upgraded into a 4-8 Week Custom Plan with our new Upgrade Your Workout Tool, completely free for all our Academy members.

We’re going in order of downloads and usage among our SHJ Army.

Coming in at number one…

I mean I can’t blame you guys at all.

Based on the top two routines even the general aesthetic that comes in at the top spots is a lean and mean chiseled machine.

Okay, that was lame.

Zac Efron’s workout routine SURGED in with downloads and usage upon the release of Baywatch, and continues to get consistent numbers.

But, our number two and three aren’t THAT far behind..

I’m honestly curious if some of you were able to guess this one.

I mean, I see the stats and the downloads among users, so I knew he was up there; but I also thought maybe Top 5, not pushing for the number one spot!

Tom Holland has fans all over the world looking to turn into his version of Spider-Man.

Every time he looks stunned taking off his shirt or Spidey-suit in a movie, thousands more join The SHJ Army in hopes to train like Holland and achieve that slim and toned six pack bod.

Now this one I could have guessed!

Chris Hemsworth sends shockwaves through The SHJ Army every single time he appears on the big screen.

Each time he comes back with a more chiseled physique.

His overall transformation is actually incredible, and even his training style is super fun and unique.

He’s one of the handful of celebs that has had his routine updated (got a version two) due to the changes in his training.

One of my personal all time favorites!

Statham’s routine was actually a HUGE motivation and we did extra research on his training styles in order to create our Bodyweight Book.

AND, to top it off, I’m actually (at the time of writing this) guinea pig testing The Bodyweight Book and full calisthenics training to see how my physique and strength fair.

Judging by Statham’s physique I should be just fine…

Here’s another one I could have guessed would be in the top 5!

Reynolds has consistently shown off his six pack in movies, strutting a lean and chiseled physique, and only bringing it back better than ever as Deadpool.

If only he could show off abs as Pikachu somehow…

Reynolds falls into that category of lean and toned, with a lower body-fat, which as you can see makes up almost our entire top 5 slots.

Seems like we have a front-runner in goal physiques.

Alright, Marky Mark is in the house.

While Mark Wahlberg shows off a lean physique a decent amount of the time, he’s also one of our first on our top 10 list that has come in looking bulkier than lean while still having SHJ Army members flood in to take advantage of his routine.

Yes, Hemsworth has bulked up, but he’s also always been lean when hitting the screen, where-as Wahlberg has specifically had thousands come and use his workout after release of Pain & Gain, where he looked more bulked up than lean!

Seems like it’s not JUST the lean physique that people want.

I’m pretty sure I would count Captain Amer-I mean Chris Evans as a bulkier style physique.

His transformation was definitely one that required tacking on lean muscle mass, and he’s more known for his incredible pecs than he is for his abs.

This one I knew for certain would make the list.

We’ve had SO many incredible success stories from this workout that I couldn’t imagine it not being on here.

I’ll admit that Tom Hardy’s physique is a bit all over the place, but his Warrior transformation really is just incredible.

And then, top if off with his look for Bane and who wouldn’t want to give it a shot?

So regardless of if you’re looking to get those incredible traps, build a bigger bulkier physique, or even cut down and become a warrior; this might be the routine for you.

This one actually really surprised me.

I didn’t expect to see Hunnam even on the top 20 list.

But, Hunnam’s physique is back on track with that lean and slender look with a six pack to match.

AND, the cool thing about Hunnam’s workout is that it’s SUPER simple.

Not only is it calisthenics, but it’s a very simplified variation to Jason Statham’s more technical style.

I will admit that I thought Jordan was going to be top 5.

His workout has been used so much and we’ve had so many people join The SHJ Army looking to transform like him that he’s another one on the list of celebs to get an updated workout routine (and version two).

His training style changed drastically from Creed to Black Panther, so much so that he was THE FIRST to receive an update on SHJ.

The issue is, the numbers for our other nine celebs are just so high that it’s going to take Jordan some time to get to that Top Five marker.

Click here to check out Michael B. Jordan’s workout and diet.

Okay, I felt it was only fair to add this section for a very specific reason.

These three celebs have the numbers that our Top Ten list has when it comes to interest (and sometimes even higher), BUT, our SHJ Army tends to then turn to one of the alternatives due to the fact that these three routines are pretty high intensity.

BUT, each of these three celebs utilized this type of training, so we won’t scale back just because of that; especially considering there’s still thousands of members still crushing these workouts each and every week.

Use these links to checkout the workouts:

And that’s a wrap.

I’m really curious to know what you guys thought about this.

Who did you think would make the Top Ten list?  Who do you think is missing from it?

I’ll tell you two men I thought were going to be here that weren’t: Chris Pratt and Hugh Jackman!

Last Chance: Download ALL of these Celeb Workout Routine PDFs 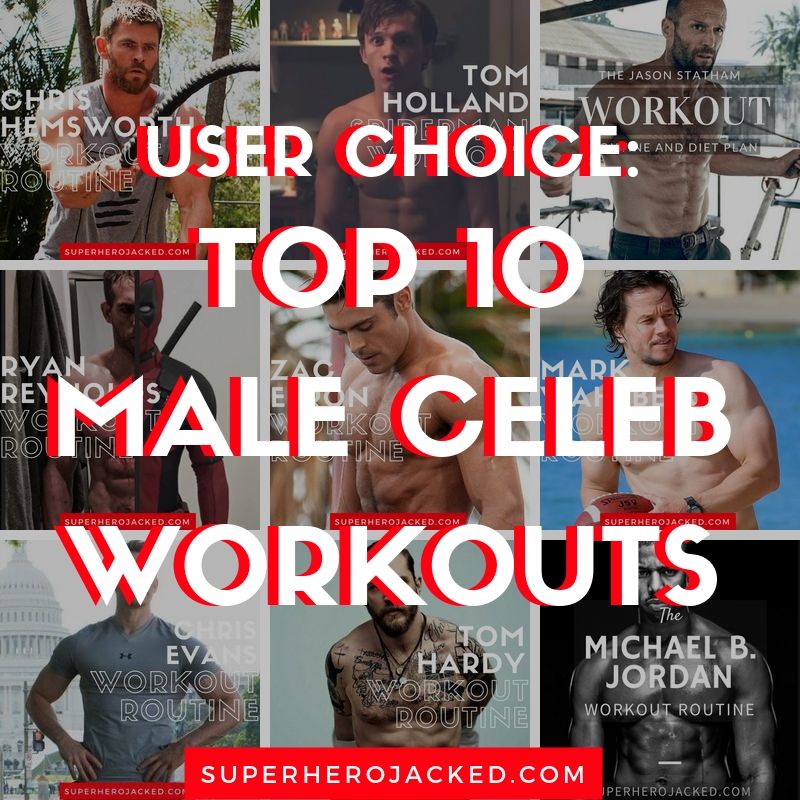