Our new season of My Hero Academia comes out this weekend and it’s time for some more characters to hit SHJ.

The only character we’ve seen this far is All Might, but we’re ready to aim to pass!

Well, I should correct myself seeing as how this is coming as our SECOND routine of the week, having seen Deku’s training protocol to get ready for One For All as well!

But, after seeing that one I think it’s a perfect spot to jump over to Asui with her abilities (which we’ll talk about later), because they’ll enable us to make for a super-fun program.

And, spoiler alert, we’re even thinking about a new My Hero Academia Mega Path for The Academy this month as well!

Asui is very short. They even include so in her basic bio.

Referring to her as a “short girl”.

This is where I get to break down the “how” and “why” of the workout we’re going to build based on the characters, in this case Asui’s, powers and/or abilities.

Let’s start with her Wiki for a brief bio:

Tsuyu is a short girl of a relatively slender build, compared to her classmates, who has notably large hands. Her appearance is rather frog-like; she has a very wide mouth, which dips down a little in the middle just like that of a common frog, and oval-shaped eyes with large, black irises, their lower eyelashes visibly pronounced, and she also demonstrates some frog-like mannerisms, like hopping on all fours instead of running, and holding herself in a way that is somewhat connotative of a frog. Her hair is a dark sea-green color, and is very long, reaching all the way to her waist, the ends tied together at the bottom in a bow of hair. She has two shoulder-length clumps framing her face, and shorter bangs between her eyes, some of them partially swept to each side.

And now we’ll jump to more specifics about her Quirk:

Frog: Tsuyu’s Quirk allows her to do anything a frog can do such as: hopping long distances, jumping, sticking to walls, extending her tongue, which can lift an entire person’s body, up to a maximum of 20 meters, ejecting / washing her stomach, secreting toxic, sticky liquid, and camouflage. However, when she is in cold environments for too long, she is unable to use her Quirk and goes into hibernation.

As part of her training, Tsuyu worked out all the muscles in her body, including her tongue, by rock climbing on the side of a cliff while having her elongated tongue remain in place at the top of the structure.

Which they continue on by describing her overall abilities (eventually expanding on with keen intellect that won’t be listed below):

Overall Abilities: Tsuyu has proven to be a highly capable individual. Using the frog-based abilities granted by her Quirk, Tsuyu excels in both close-range and long-range combat. She employs a fighting style that involves a great amount agility and powerful leaps to evade, surprise, and confuse her opponents, as well as using her increased leg strength to deliver powerful kicks. Tsuyu can also use her elongated tongue in a grappling or whip-like fashion.

Tsuyu also possesses great camaraderie, effectively combining her own Quirk abilities with that of anyone she’s paired with, most notably when she and Ochaco Uraraka, combined their powers to create a unison Super Move known as “Meteor Fafrotskies”. According to Recovery Girl, Tsuyu is a very outstanding student with little to no weaknesses, and can provide support to anyone, even someone as powerful as Fumikage Tokoyami, one of the strongest students in Class 1-A. Her overall abilities make her one of the strongest female students in her class.

I think we’ll be seeing a lot of calisthenics, parkour, and then an emphasis on legs and glutes.

You think you’re ready for it?

We’re going to be focusing in on leg power, calisthenics, mixed martial arts, parkour, and of course, agility!  I’ll also be giving you the option to step it up a notch with a weekly 5k run.

For this one we’ll be borrowing specific training styles from some of our other programs.

Bent Over Rows (DB on bench)

For this one we’ll be borrowing specific training styles from some of our other programs. 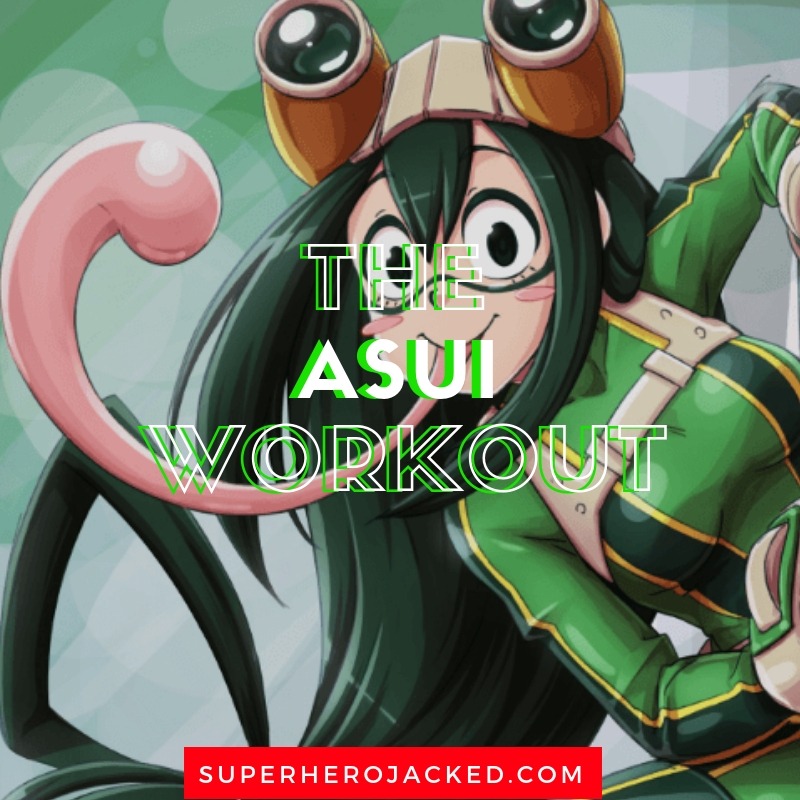