Did you guys know Hellstorm was coming to Hulu?

Daimon Hellstrom, to be more precise.

Hellstorm, who we’ll talk about more in depth in his research section, is known as the Son of Stan and Hellstorm, and is part of the Marvel Universe often paired with Ghost Rider.

Tom Austen and Sydney Lemmon have already been cast as Daimon Hellstrom and Ana Hellstrom (just to give you an idea of what we’re working with), so don’t be shocked if we see them hit SHJ not too far down the road.

Oh, and don’t be surprised if we also see Ghost Rider over in our new Cosplay Workout & Guide Category as well!

Hellstorm would just make it to the average height among men if we were talking about celebs at SHJ.

But, we’re not, so he’ll just have to fall in the big range of heroes we’ve seen!

This is where I get to break down the “how” and “why” of the workout we’re going to build based on the characters, in this case Hellstorm’s, powers and/or abilities.

This one is actually pretty unique.

I’m going to start with a bit of a bio on Hellstorm pulled right from his Wiki:

The Hell-Lords had long desired to sire a child with a human woman for use as a gateway to gain further power. A demon calling himself Satan took human form and established the trappings of a mortal life for himself near Fire Lake, Massachusetts. Keeping his true identity a secret, he married a young woman, Victoria Wingate. Daimon was born to the “Hellstrom’s” a year later with a strange pentagram-shaped birthmark on his chest. His sister, Satana, was born when Daimon was three.

When Hellstrom was a young adolescent, Victoria interrupted a ritual sacrifice “Satan” had staged in their basement involving the participation of Satana. Traumatized to the point of hysteria, Victoria was institutionalized. She eventually regained enough of her sanity to write a full diary describing her life with the demon before she died. Hellstrom and his sister meanwhile were placed in separate orphanages, and “Satan” disappeared to his netherworld domain, where he eventually brought Satana.

But it gets better when it comes to how we’re actually going to train like him.

Check this out (it’s a bit long, but it’s his entire powers and abilities section up until the really interesting part):

As a ruler of a dimension of Hell, Hellstrom commands vast power in his own dimension, the full details and extent of which may yet to be revealed. Potentially, he can perform virtually any magical feat.

As Hellstorm, Daimon Hellstrom could sense the presence of the supernatural and could cast spells to transport himself and others into mystical dimensions and back to Earth. Other powers he exhibited at this time may not have stemmed from himself (as he had lost his “Darksoul,” see below) but from his magical trident. Hellstorm could project “soulfire” (also called “hellfire”) from his trident, causing excruciating pain within living beings through direct contact of a person’s life force. The soulfire did not physically burn in the sense that true fire does, and Hellstrom could project soulfire as a concussive blast of force.

As the Son of Satan, Hellstrom possessed supernatural powers derived from his “Darksoul,” a demonic counterpart to his human soul, which physically manifested itself in the pentagram-shaped birthmark on his chest. The Darksoul granted him superhuman strength and the ability to project soulfire. He was able to magically change into his demonic costume at will be extending the middle three fingers of each hand in the shape of a trident, concentrating, and letting his soulfire engulf his body. Once, Hellstrom used his powers to travel through time to ancient Atlantis.

As Hellstorm and the Son of Satan, Hellstrom wielded a trident made of netheranium, a “psychosensitive” metal found only in “Satan’s” extra dimensional realm. The trident was a medium through which magical energies, such as Hellstrom’s soulfire, could be amplified and projected. By projecting the soulfire through the trident, Hellstrom could gain enough thrust to levitate and to fly for short periods.

Magical and Mystical manipulation: As the Son of Satan and a ruler of a dimension of Hell, Hellstrom can manipulate, create and possessed supernatural powers and spells.

But here’s more of the cool part that comes in his “Strength Level” section:

As far as is known, Daimon Hellstrom now possesses the normal human strength of a man of his age, height, and build who engages in moderate regular exercise.

Possessing a Darksoul (the demonic version of an ordinary soul) grants Hellstrom greater strength than he would otherwise possess, enabling him to lift (press) about 750 pounds.

Let’s break that down into simpler terms just in case you’re still lost in that huge section of powers I threw at you.

Daimon Hellstrom currently possesses the strength of a normal human who would engage in regular exercise, BUT when he possesses a Darksoul he is granted greater strength than he would otherwise possess.

So what do you think we’re going to do?

We’re going to train for:

You ready for this?

I’m going to give you 4 days of strength training that will revolve around compound lifts and then I’ll also give you the option to rest OR add in extra cardio if you’d like to kickstart some extra fat burning to get into the chiseled Hellstorm look quicker.

Tuesday: Back and Biceps

Wednesday: Rest or Cardio and Abs

Saturday: Rest or Cardio and Abs

Hellstorm Workout: Back and Biceps

You have the option to either rest or get some added cardio in to help your fat loss.

This routine really revolves around strength gain, but if you’re looking to cut you’ll have to do it with your diet (of course), and this added cardio will just support that even more.

Here’s some options for varied cardio, in which I like to perform 45-60 minutes.

You have the option to either rest or get some added cardio in to help your fat loss.

This routine really revolves around strength gain, but if you’re looking to cut you’ll have to do it with your diet (of course), and this added cardio will just support that even more.

Here’s some options for varied cardio, in which I like to perform 45-60 minutes. 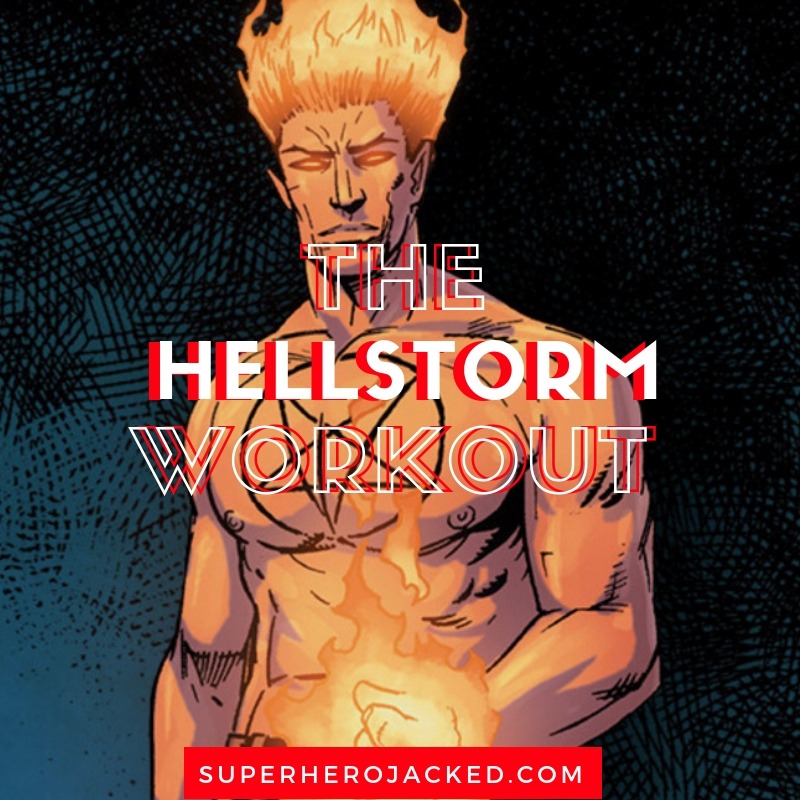