Did you know Ash Ketchum is officially a Pokemon Master?

After all these years Ash finally defeated The Pokemon League and became a true Pokemon Master!

For those of you who have been following along since the beginning like me, that’s over 20 years of adventure to get to this point!

Which means, if you have been following along, you’re probably wondering why we’ve waited so long to feature Ash on the site after having already seen Misty, Brock, and even Machamp!

Well, I specifically waited for this weekend considering I’m now sitting in front of my Nintendo Switch nerding out over the new Pokemon Sword and Shield release!

And, it’s safe to say that they’re absolutely amazing.

By the way, if you don’t already know, this is our new category that I announced I’ll be starting due to the high demand in cosplayers we have hitting the site, but it’s also an opportunity for me to give you secondary options to the main character workouts that will be slightly more generic and beginner-intermediate oriented; whereas the character workouts get pretty high volume when we begin talking about our overpowered characters!

Ash is only 10 years old when he sets out on his journey to become a Pokemon Master.

There’s a theory that he is aging, and another that says he can’t; but his height and weight generally falls in the same category nonetheless: short and light.

This is normally where (in the character workouts at least) I’d throw you guys a nice copy paster to give you some links to awesome dietary guidelines.

The celebrity workouts get their own custom planning based around what that celebrity does, but the characters are very contingent on specific goals/starting points.

The same is going to be done here, but I’m going to be making some changes to help you out a little bit more.  So I’m going to start by suggesting what I think is the best Superhero Program for this cosplay if you choose to step it up a notch.  Of course, you can really step it up a notch and join our Academy to get access to everything we have to offer, but if not, you might want to check out The Program Shop for other options or even take The Program Selection Quiz to help you out.

Either way, my suggestion would be: The Cut and Shred

Which brings us to our information from the character workouts if you’re looking to go the free-route (which is totally fine):

Now it’s time to not transform your body, but rather your attire.

As you can tell from the picture above (and throughout the article as well), Ash Ketchum cosplay has a couple options.

You can definitely have some fun with this.

Here’s some suggestions, and I tried to diversify it:

**These are not the budget options.  These are from our friends over at EZCosplay and are NOT simply “Halloween Costumes” but cosplay outfits that are made to transform you into these characters.**

**These are budget options that are from Amazon and may be simply Halloween Costume items, but are also the top options we suggest from the platform.**

And there you have it.

Along with this killer workout I’m going to build for you to turn you into Ash Ketchum, these are our favorite options for his outfit.

Don’t forget to tag me in your pics @MikeRomaine on Insta!

So we have some more fun (although may not as much) in this section.

Here I’ll be giving you a bit of a bio and also utilizing what we’ve discussed in the section above (and some more) to break down what we’ll be looking to achieve with this workout routine I’ll be building for you.

So let’s start at Pokemon Wiki Fandom with a bit of a biography for Ash Ketchum (although if you don’t know it by heart, shame on you!):

Ash Ketchum is the main protagonist of the Pokémon anime series who has always dreamed of becoming a Pokémon Master. As soon as he turned ten years old, he rushed to Professor Oak’s Laboratory to get his first Pokémon. He is the first human character to be introduced in the series. Originally wanting to choose Squirtle, Ash ended up receiving the Pokémon Pikachu, as he arrived late leaving him with no other starters to choose from. He sets onto his adventure later in the day. He is currently also the only character shown to have been to all of the regions. In the Sun & Moon series, he becomes the first Champion of the Alola region’s Pokémon League.

Now that you know what we’re workin’ with here, we can get into a bit more (mainly because I want to).

Here’s a bit more of his appearance information:

Ash wears a few outfits, as seen in the Pokémon anime, he also has black hair and brown eyes, and always wears a cap. Over the past regions, he had different caps.

Ash has two lighting bolts-like markings underneath each eye.

Ash has a narrow, triangular, edgy, tuft of hair in the middle of his forehead, that comes to point on the right side. Without the cap, Ash has a cowlick.

Ash’s pupils were not visible during the “Indigo League” through the “Diamond and Peal series”, until the “Black and White series” made them more profound and distinguishable.

There’s some continuation for each one of the series, consisting of Original, Advanced Gen, Diamond and Pearl, Best Wishes!, XY, Sun and Moon, and Sword and Shield, but if you’d like to swap the variations up more-so than what I added above you’ll have to specifically find each of those minor changes to his appearance.

The variation 2 of his cosplay is actually specifically the Pokemon XY Series outfit!

Also, normally these workouts are based solely around the appearance, which allows us to build beginner and intermediate programs around some characters that might otherwise get advanced programs if we built it around their powers.

That being said: Ash is young and more-so a skinny kid than anything else.

For that reason: I’m still going to be building you a workout to embody Ash, but I am going to be Pokemon-ifying it!

Here’s some of the things we know and have seen about Ash throughout the course of the series:

So for this one we’ll be incorporating all of it!

You’re going to be tracking your walking daily as your main training for this cosplay, but you’ll also be adding in some other forms of training on top of that as well.

You’re going to track your walking every single day, but you’ll also sub in different training variations 3-5 days a week on top of that training as well if you’d really like to lose some weight and tone up to embody Ash!

When we do our celebrity and character workouts we base the difficulty level off of their routines/their powers.  For this one it’s just a judgement call on how I believe we can best get you looking like each character.  For that reason I’m providing a level for each.

This is just a sample.  This can be done 3 days with add-ons, or even 5, but the point is that it can vary a bunch!

We’ve seen some celebrities actually do this being that they’re traveling and can’t get workouts in.

They’ll make sure they’re active enough throughout the day to get 10,000 steps in.

If you’re Ash Ketchum, you probably get a ton more than that!  So if you’re really utilizing this walking plan, and have the time to get in all the steps, the embodiment and cosplay should be a breeze.

If you hate reading:

We have a handful of calisthenics guides on the site, but we’re going to keep it super simple for this one and utilize some things on-the-go.

So that means, while I would usually push pull-ups pretty hard, I’ll opt to cut them from this one in favor of ease-of-use!

Here’s what you’ll be adding in on top of your walking:

This is the ONE add-on program that can actually count towards your daily walking.

If you want to get some long distance cardio or even some sprints in there, you can count it towards your 10K of daily walking.

Ash isn’t THE BIGGEST swimmer, but we have seen him dive down and take on the water.

Plus, he has Misty as his friend to push him in and get him going, so he has to be pretty good, right?

Either way we’ll be utilizing a beginner program that we have had shared among celebrities (and continue to use at SHJ). 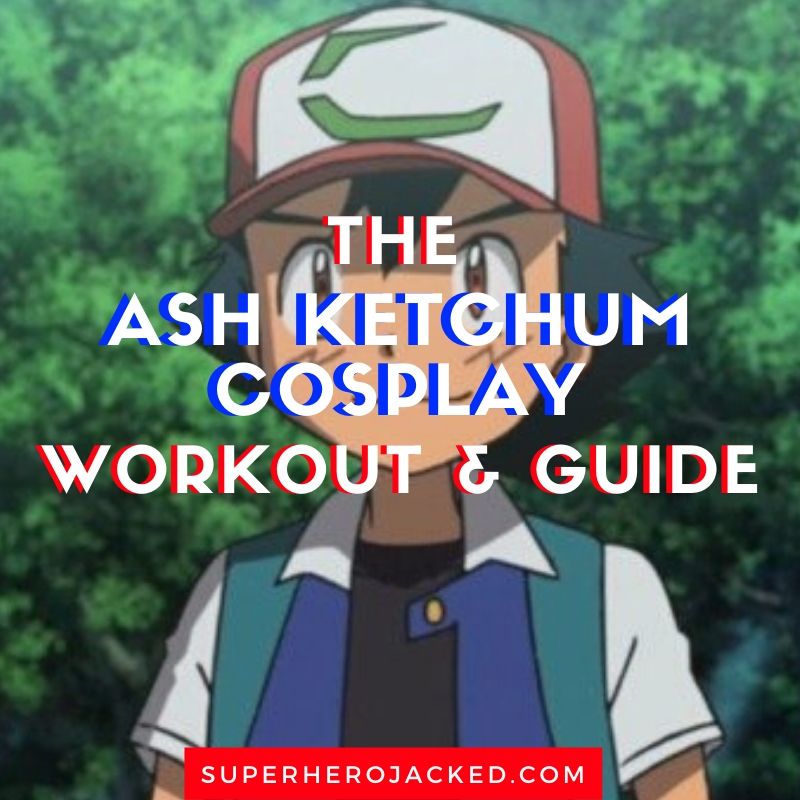