How could we host hundreds of character workout routines at SHJ and not have Blade?

The answer is unknown.

It almost seems impossible.  Which is why we’re here today to make tribute to Eric Brooks way ahead of time before the new Blade reboot with Mahershala Ali comes to the MCU.

We actually hadn’t seen a Marvel character in a few weeks prior to last week’s Shang-Chi workout.

Prior to that we were going through tons of Marvel characters and to catch up with those announced coming to Disney+ in the future with characters like Falcon, Winter Soldier, Vision, and even Kate Bishop!

Blade would actually fall right into the category of average height among male celebs at SHJ.

Although I actually pictured him much shorter, which I believe is because Wesley Snipes (who portrays him in the original trilogy) only stands in at 5’9!

This is where I get to break down the “how” and “why” of the workout we’re going to build based on the characters, in this case Blade’s, powers and/or abilities.

I should start by pointing out that we’ll be basing this off Eric Brooks the Marvel comic character from Earth-616, not the Blade from the 1998 movie trilogy.

To give you a better idea of what I’m specifically referring to, this is a bit of a bio for our Blade, straight from his Wiki Fandom:

Eric Brooks was born in Soho, London, on the 24th October 1929  His father, Lucas Cross, a member of the secret society the Order of Tyrana, sent his pregnant wife Tara to England before he was taken prisoner in Latveria. There she took the name “Vanessa Brooks” and found shelter with brothel owner Madame Vanity, another member of the Order of Tyrana. Experiencing labor complications, Tara was forced to seek a doctor’s assistance. The doctor, Deacon Frost, was actually a ravenous vampire and feasted on the woman as she gave birth, passing on a series of enzymes that altered her baby. The enzymes entered the infant’s bloodstream, transforming him into a being tainted by a vampire’s kiss, but not converted. In other words half-human, half-vampire also called a Dhampir. Frost was driven away before he could slay the child, but Tara perished, leaving the orphaned Eric Brooks to be raised at Madame Vanity’s brothel.

And for his powers and abilities they give us this (there’s a lot):

And let’s not forget these:

AND, those are actually just his POWERS.  He still has a list of abilities that go with these.

Which I’m sure you want to know about.

I actually left all the details within each of Blade’s powers, making it a much longer read, but well worth it if you’re into the lore and background information like I am.

Here’s what Wiki tells us about his abilities:

So we have a ton of things to work around with this workout.

I think the best way to go about this is to really focus in on the important aspects that will get us closer to really embodying Blade.

For that reason this program will mainly focus on superhuman strength, speed, agility and endurance above all else; which also makes sense because those are the things a workout could most strive to accomplish.

You think you’re ready to attempt all those things in one workout?

You’re going to be lifting 5 days per week with 4 days devoted to compounds and lifting heavy with some cardio on top and then 1 day devoted to high intensity training and some other versatile full body movements.  On top of that I suggest throwing in some extra endurance training, parkour training, and possibly even some mixed martial arts training, all on your off days.  I will give you resources for all of these below!

Tuesday: Back Squats and Cardio

Blade Workout: Back Squats and Cardio

Barbell or DB Clean and Press

To build up your endurance I suggest:

Kid Flash and Constance Wu’s articles both have a Couch to 10K Training Protocol if you’d like to start there!

As for Parkour, which will be significantly easier with some endurance training, you can utilize our SHJ Parkour Guide which comes in the form of The Nightrunner Workout that I worked on to create with Academy member Felix! 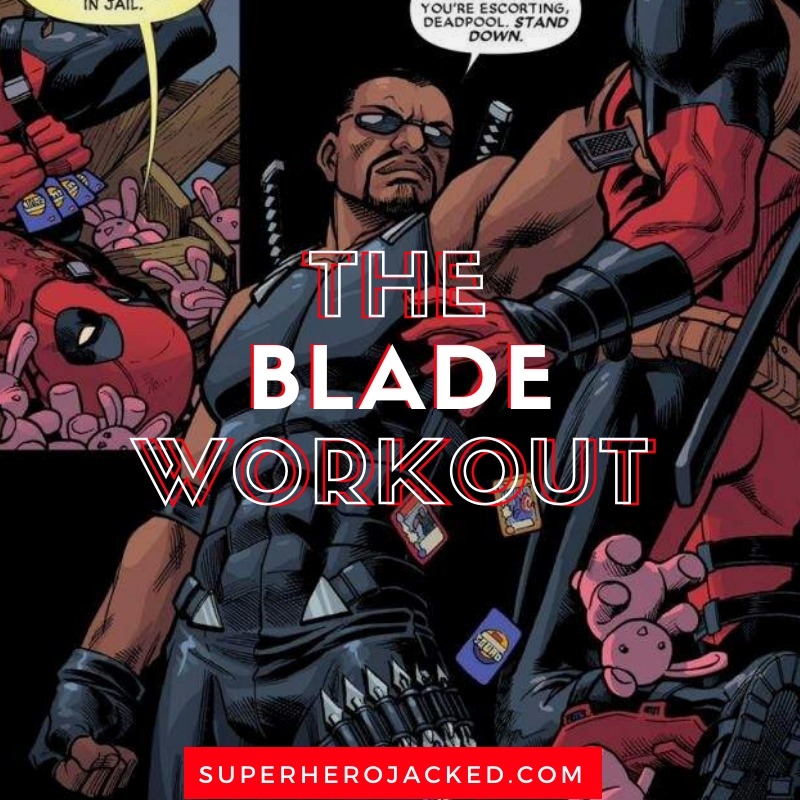