BONUS: Download the FREE Deadshot Workout Routine PDF
**This is an SHJ Army member submitted article from Academy member Kenneth. I have only made certain changes and modifications to SHJ-ify it.**

Deadshot is one of our characters that doesn’t have powers and is still absolutely incredible.


Although it is implied, as we’ll see in his powers and ability section, that he has enhanced senses…

We recently had Deadshot portrayed by Will Smith in Suicide Squad, but for the follow up “The Suicide Squad” it was originally rumored that Idris Elba was going to take the role, but later came out that he’s in the movie, just not as Deadshot.

So, ambiguity here is fun.

And for those of you who read the headline to this article “Train like The SECOND Most Lethal Assassin in All of DC Comics”: the first is Deathstroke!

Deadshot comes in just making it to what we’d consider is the average height among male celebs we’ve seen at SHJ.

Will Smith and Idris Elba actually both stand in at 6’2, one inch above Deadshot, and right in the center of that 6’1-6’3 range we consider the average.

This is where I get to break down the “how” and “why” of the workout we’re going to build based on the characters, in this case Deadshot’s, powers and/or abilities.

First I want to start with some background information on Deadshot, though.

Here’s what his Wiki Fandom tells us about him:

Floyd Lawton is Deadshot, known as the world’s deadliest marksman. His weapons of choice are two guns mounted on each wrist. He began his career as a vigilante in Gotham City, but he later became a highly-priced assassin and mercenary. He has been a core member of the Secret Six and the Suicide Squad.

And for a time Deadshot even replaced Batman.

Here’s more about it:

Floyd Lawton moved to Gotham City where he started living as a millionaire playboy. Wearing a domino mask, top hat, and tuxedo, he became the gun-toting vigilante Deadshot. Deadshot worked closely with Commissioner Gordon during Batman’s absence. He became popular enough that they build a “Deadshot Signal” to replace the Bat-Signal. Batman investigated Deadshot and found that he was in cahoots with criminals to distract police from more serious crimes. During the final confrontation, Deadshot is unable to kill Batman as the Dark Knight had tampered his weapons. Like this, Lawton was arrested and sent to prison.

And, Deadshot missing a shot in this series is huge considering he gloats to having never missed!

Here’s some of Deadshot’s origins:

Floyd Lawton grew up as a member of the idle rich. His father George Lawton made money in real estate, and his mother Genevieve Pitt belonged to a family of wealthy bankers. His brother Edward Lawton was a golden child, described as the opposite of Floyd. Both parents doted on Edward while treating Floyd poorly, but Floyd still grew up idolizing his older brother. George was unfaithful and cruel to Genevieve, so she asked her sons to kill their father. Eddie locked Floyd in the boathouse when Floyd tried to warn his father. Floyd broke out and grabbed his hunting rifle. Eddie had already shot their father in the second-floor library, paralyzing George for life, and was preparing to kill him. Floyd climbed a tree and aimed to disarm his brother, but a branch snapped and he shot Eddie between the eyes. He killed the brother he loved to save the father he hated. This incident was covered up to avoid dishonoring the family name. George denied Genevieve a divorce and forced her to live alone on a small stipend.

Some time after that, Lawton sought the training of the professional assassin David Cain, who instructed Lawton and taught him his marksmanship abilities.

Which leaves us with his powers and abilities (what we’ll use to put together this routine) as:

But if you know anything about Deadshot, which you might even know enough just from reading his brief bio I shared, his assassin skill-ship is not just from his marksmanship and hand-to-hand combat.

He can make his way around a city, or a target in a way that normal human can.

So we have to train to be able to do the same.

Do you think you’re ready to take on this assassin’s training regime?

Monday: Calisthenics, Core and Cardio A

Friday: Calisthenics, Core and Circuit B

If you have ammo cans (or empty 5 gallon buckets) fill them up halfway and do the following:

Use The Kid Flash or Constance Wu Couch to 10k and work your way up to long distance running.

Or start with this based on your fitness level:

As for Parkour, which will definitely be made easier with your endurance training, and necessary to embody Deadshot, you can utilize our SHJ Parkour Guide which comes in the form of our Nightrunner workout which was made by myself and Academy member Felix! 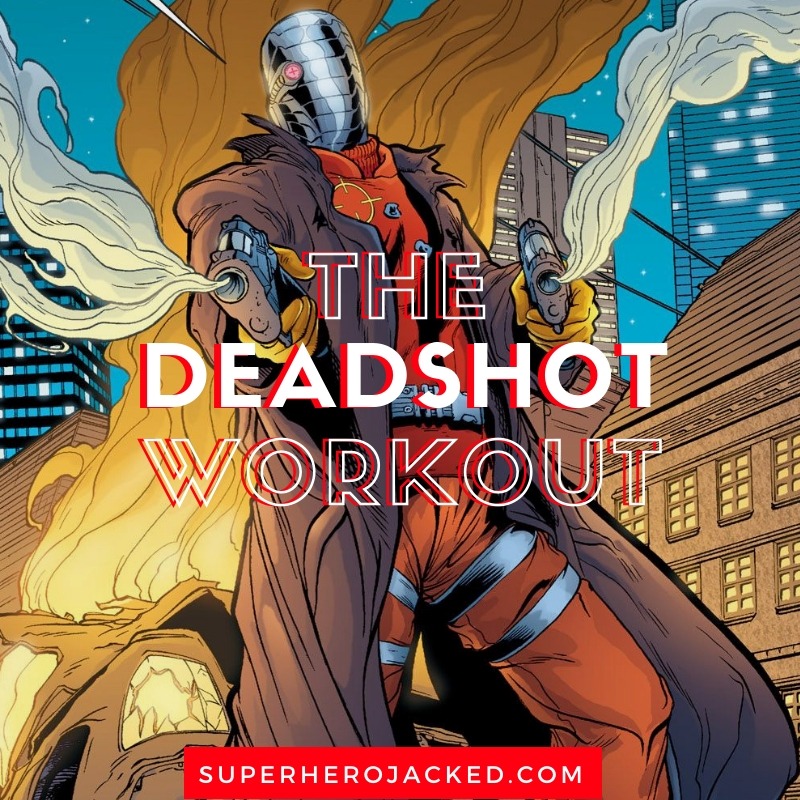