Simu Liu’s workout NEEDED to happen as soon as possible.

It’s almost as if it goes hand-in-hand with Kumail Nanjiani’s workout routine.

As I’m going to tell you much more about later on in this article: Simu Liu is a go-getter.  If he wants something he’s going to go after it with all he’s got and work towards that goal.

He went from being an accountant (which he was apparently really bad at) to being in Kim’s Convenience, Taken, Blood and Water, and then from eating shrimp crackers on his couch to landing a a gig as Marvel’s Shang-Chi.

Simu Liu is actually taller than I expected him to be, although he just missed the average height range among men.

And when I just JUST misses it, I’m talking literally by one inch.

Simu Liu knows that diet is everything.

And by that I mean: he knows that you can’t out train your diet and your diet is going to really make or break your superhero transformation.

If you’re trying to pack on weight, high intensity low reps and lots of protein right after. Eat eat eat! It’s all diet.

And that’s not the only thing that he does on Twitter.

He actually used it to become a superhero…but more on that later.

What we see there in that Tweet doesn’t necessarily mean Liu is eating a lot; but rather it means that he knows the process in which we utilize to either bulk or cut weight.

Which means if he’s cutting down and leaning out for a role he’s lowering his intake while sticking to his high protein focus [to maintain his muscle].

In an interview with NBC News Liu tells them about his cheat meal.

When they ask he says:

“I think I’ve mentioned it before, but it’s…it’s Korean BBQ.”

In a manner that almost seems like he means to say “c’mon now, you guys should know this”.

And we constantly see more and more celebrities utilizing cheat meals to make their diets sustainable (which is a huge topic point in my book).

So if I mean to send you off without any specifics, I would say that Simu Liu is well aware of calorie counting and probably eats fairly intuitively while being aware of an overall number that it’s going to take for him to reach his goals (whether that be bulking up muscle or cutting down fat and leaning out).

If you guys need help with this you can check out our Official Guide to Calorie Counting, but there will be plenty more resources below.

Simu Liu is a go-getter.

He actually quit his job working for Deloitte, one of the “big four” accounting firms, which he says was because he was “so bad”.

The exact tweet was in response to a picture of him on a QuickBooks Accounting book in which he says:

First he quit his job to give acting a shot, and then he decided to call out Marvel and ask them for a gig.

OK @Marvel, are we gonna talk or what #ShangChi

And months later, after landing the gig he tweets:

>Which all ties us back to the fact that…Simu Liu is a go-getter.  He’s going to work for what he wants, and being a superhero is what he wants…

Although we also did just find out he also eats shrimp crackers.

Okay, okay, but on to serious work that comes in the form of breaking down some more information about Simu Liu’s workout routine.

We already know he’s a fan of high intensity and low reps for packing on weight (and/or gaining mass).

I was also able to also track down multiple training videos of Liu jumping in with friends [who are also YouTubers] so we have a pretty awesome idea of how he formats his workouts.

Simu Liu shared a workout with both Jason from Jason and Lucia’s YouTube and also Bart from Barbell Brigade.

In training with Bart he is taught some of the basics of powerlifting and is put through a pretty grueling powerlifting session which makes it pretty apparent that his workout is much more likely to be formatted like the one he did with Jason.

In that video we can see the pair going through movements like:

And three of these (which I’ll format for you later) are throw together into a triset.

We also can find Liu doing a ton of other movements in some other videos, so we have a wide range to go on.

That being said, I do want to include the fact that I will also be programming these based around Liu’s lean physique.  He is fairly skinny and has a lean and toned physique much more than he has a bulky physique (toned abs and muscles) which is even more apparent as he stands next to Jason and Bart who both sport more of a bulky physique.

Simu Liu’s workout consists of much more than just the gym.  He is super sporty and athletic and much of this training will also revolve around a high level of activity (which if you can’t replicate you will have to opt for cardio and a circuit).  The other portion of the workout will consist of 3 days a week of full body training made up from all the workouts I was able to find him utilizing.

I’m going to be giving you a handful of resources to utilize for this one, but I also want to give you a list of activities that Liu engages in.

Here’s some of the activities Liu can be caught taking part in:

So feel free to get out there and engage in these same activities to burn calories and shred up your muscles!

If not, though, it’s going to be your job to still get in your training.

Here are some other resources you can utilize before I give you some alternative options:

We’ve also put together a fun parkour workout that might be right up your alley if you’re looking to get the Simu Liu physique.

I worked with Academy member Felix to put it together under superhero Nightrunner! 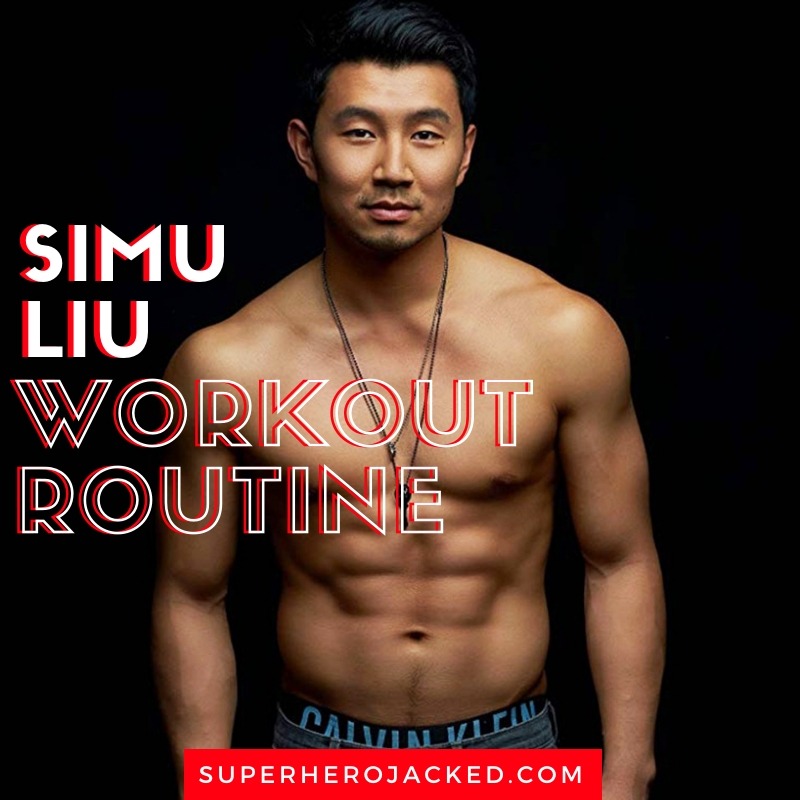