I’ll tell you right now that Hadid is not a fan of typical gym sessions and running on a treadmill.

That being said, you can replicate the training of the supermodel quite easily.

Gigi Hadid is a big advocate against body shaming, and says she’s been trying to gain weight, but her super active lifestyle, on top of her training that keeps her nice and toned, makes it difficult.

Hadid is of course first a foremost a model, having made it to the Models.com Top 50 Models as early as 2014, but she’s also much more than that.

Hadid is an influencer with over 51 million followers on her Instagram, and also appearing on things other than just the top magazines in the world; such as film, television and even music videos.

At 5’10 she’s actually one of the tallest women we’ve seen at SHJ.

Hadid does have dietary restrictions she follows most of the time, but she also believes in indulging as well.

When we took at The Top Diets Among ALL Celebrities recently there was an overwhelming amount that felt the same way.

Hadid is actually even known for famously saying:

“Eat clean to stay fit, have a burger to stay sane”.

But Hadid doesn’t only love burgers, she also has other go-to choices as well.

“I love acai bowls,” she says. “We always took them to the beach growing up, so I guess it’s a little piece of home.”

And Shape.com shares some more information for us about Hadid’s pre and post workout meals:

How she fuels for her workouts: Gigi says her go-to snacks for before a workout are chips and guac or carrots and hummus. Afterwards? “A big meal.”

Although Harpers Bazaar (with some help from Women’s Health) also weighs in with some more awesome information for us about Hadid’s outlook on nutrition here:

A self-confessed fitness addict, Hadid knows the power of switching up workout routines, with her trainer Rob Piela telling Women’s Health: “No one wants to be doing the same thing over and over, and they like to be challenged. So we shake things up depending on how [she’s] feeling. Consistency is key.”

And they continue with a ton more helpful information as well (with more help from outside sources):

The supermodel told Harper’s BAZAAR US that she loves scrambled eggs and toast as it’s an “easy go-to”. She also said “My boyfriend, being British, got me into breakfast beans, so that’s what I’ve been eating lately”.  Her favourite salad is an arugula salad, which involves plenty of rocket and Parmesan cheese, and her favourite snacks are “salami, chips, hummus, carrots and fruit”, according to SELF.  Plenty of models have openly discussed omitting caffeine for their health and wellbeing, but Hadid has long stated her dependence on coffee to get through the day—something we can definitely relate to.

Though, in order to keep from overwhelming you with awesome information, I did actually break it up a bit.

As much as Hadid loves comfort foods, the supermodel often needs to whip herself into shape for a job, and it’s been reported that she drinks smoothies to help shred any excess weight.
Though plenty of models’ diets involve some method of fasting, Hadid has been open about the fact that starving yourself is never a viable option—for your health, or for your sanity.
Speaking to SELF in 2016, Hadid said “If I don’t have milk and bread and eggs, then I can’t deal.”

To wrap up, here’s a last bit from an interview with her trainer and Savour Flair:

“It depends on the goals of the person, really. If someone is looking to build lean muscle, they would take in some sugar afterwards to get the glycogen levels up and protein to help rebuild the muscle. A smoothie is pretty ideal because it’s an engineered perfect balance of food. Carbs, fat, protein, and sugar – the nutritional content of smoothies is great. I personally like to eat, though, so would much rather have quinoa, salmon, and salad.”

Of course, like many celebrities we’ve seen, she does switch it up, but for the most part she has (like her diet) her go-to options.

Without a doubt, across the board from all the sources I was able to find, we know Gigi Hadid’s favorite workout is boxing.

To start I want to share something from Bravo TV about Hadid’s love for boxing (and why):

“I grew up playing volleyball and riding horses, so it was weird to move to NYC and just have to go to the gym and lift weights and run. I was so bored!” she says. “I started boxing and it became my new sport. It’s an amazing cardio and strength workout and I feel like I want to go to the gym whenever I can and get better.”

Although Hadid does give us an alternative as well:

“If boxing isn’t your thing, [you] can swap it out for another cardio activity. I’ve always liked jump rope—it’s great for legs—or running [if you prefer].  You just want to keep your heart rate up the entire time”.

In an interview with Hadid’s trainer and India TV News we also get a ton of additional information that will help us put together a routine that is not strictly cardio based.

There we find out four of Hadid’s favorite movements are:

So expect to see all four of these in some of the alternative training methods we create to go along with Hadid’s love for boxing and cardio-driven workouts.

Another way Hadid loves to train is what her trainer shared with Shape, which we’re told is:

“three minutes of [non-stop] boxing, and then one minute of doing a lot of different leg-focused strength-training moves”.

Alongside boxing, Hadid focuses on strength and muscle training, including up building her core muscles.

And to finish off we’ll have one last quote from Hadid’s personal trainer:

“She first came to me just to keep fit… I remember, it was about three and a half years ago. It was a fun session and we got along right away. She’s super nice and easygoing, and she’s really into boxing. I think her first post after the training session was “I just found my new addiction” or something along those lines. For us, it instantly took off as boxing a lot, which we incorporate all these other exercises with. We don’t just box for an hour straight. We would box, then do some donkey kicks, then box and do some bands, then box again and do some bicycle kicks. She’s a tremendous athlete.”

I’m making this one 5+ days per week because I’m also including the fact that we need to keep up with Hadid’s overall activity level.  We’ll focus in on boxing, of course, but I’ll also be building you a full body training day, a Hadid style circuit, and also giving you a ton of alternative training methods not only mentioned by Hadid, but also her trainer.

Obviously your best move is going to be to hit the gym and work with a trainer one on one, a sparring partner or even a trainer/coach to guide you threw bag work, shadowboxing, and/or other techniques; even if it’s just to burn calories and have fun.

That being said, I do have some other options for you here on the site.

And there are a ton of other alternative options for cardio (as Hadid mentions herself) which I’ll share in another section.

For now I want to share the circuit we’ll be pairing with your Boxing/MMA Training.

“If boxing isn’t your thing, [you] can swap it out for another cardio activity. I’ve always liked jump rope—it’s great for legs—or running [if you prefer].  You just want to keep your heart rate up the entire time”.

So the first preferred alternatives are:

But her trainer also mentioned rowing and a handful of other alternatives in interviews, so we’ll continue our list.

Grande often tracks her steps, which is a great addition to our Hadid style training.

So, on your off day, assuming you won’t be going hiking or getting nearly as active as Hadid does on a daily basis, go ahead and track your steps! 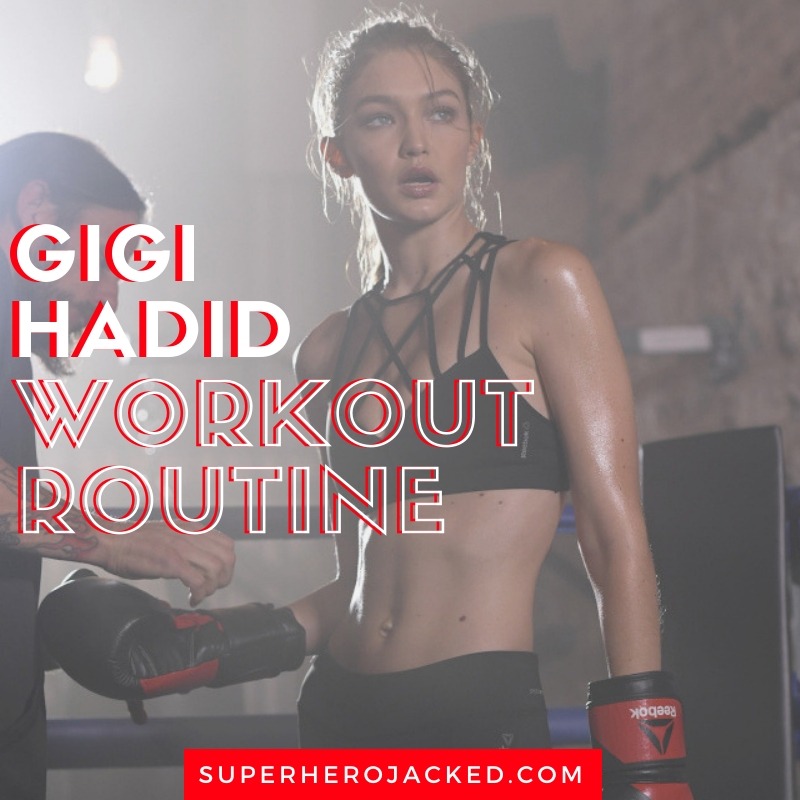