We have a nice trend going on here this week.

U.S. Agent John Walker is going to be in the upcoming Disney Plus show: The Falcon and the Winter Soldier, and Red Guardian is making an appearance in the new MCU movie Black Widow.

For that reason, we need to be prepared NOW.

Red Guardian is actually being played by David Harbour and he will be the Alexei Shostakov version of Red Guardian, which is who we will be researching and basing this workout routine on.

While Red Guardian isn’t as much of a monster as U.S. Agent, who we just saw, he still is BIG.

Two hundred and twenty pounds at 6’2 is about 40 lbs over the average we’ve seen among male celebs at that same range.

Red Guardian, Alexi (or Alexei) Shostakov to be more specific, actually goes on to be Ronin in the Earth 616 storyline.

And, if that’s not clear, that means he’s a freakin’ badass.

We actually have had a Ronin Workout Routine on SHJ, and it’s pretty intense!

It was decided at the KGB that the Shostakovs would make particularly good special operatives. While Alexi was away from home on a mission, he was informed of the state’s new plans for him and told that from then on he could have no contact with any of his past friends and acquaintances, or even his own wife. Meanwhile, a Soviet official told Natalia that her husband had died in the explosion of an experimental rocket he was testing.

Distraught, Natalia Shostakova said that she wanted to do something to be worthy of the memory of her heroic husband. The KGB had anticipated her reaction and was able to immediately put her into training to become the spy known as the Black Widow. Eventually the Black Widow, who was again using her maiden name, defected to the United States.

They go on to give us more information about how he became Red Guardian here:

The KGB trained Alexi to become the second Red Guardian, a special costumed agent who was intended to be the Soviet Union’s counterpart to Captain America. During the years of his training, Shostakov became a cruel, ruthless man, very different in personality from what he was while living with his wife.

The People’s Republic of China developed a device called the psychotron, which could induce mass hallucinations. This gave the Red Chinese a weapon against which the United States and the Soviet Union had no defense, letting them conquer one of these superpowers, eliminating it as a rival and threat.

However, the Red Chinese needed a means of bringing psychotrons within range of the countries they intended to conquer. They realized they would need the submarines of one nation to carry the psychotrons near the shores of the other. Deciding that the Soviet Union would help them conquer another country, the Red Chinese government informed the Soviets about the psychotron and their plan to conquer America.

And for those of you immediately curious about Red Guardian’s powers and abilities, we’re getting there.

He actually does not have powers; which you may have known if you’re already a Ronin fan.

They share his abilities and strength level as such:

Strength Level: The Red Guardian possessed the normal human strength of a man of his age, height, and build who engaged in intensive regular exercise.

Which means we’re still going to be replicating that “who engaged in intensive regular exercise” portion of his strength level.

Be prepared to step it up a notch because we don’t have Super-Soldier Serum or Power Broker Enhancements to help us out here.

We’re going to be building the strength portion of this training around a PPL Split and then we’ll also be adding in extra circuit training for agility and endurance, on top of calisthenics and core training which will go nicely with our one long distance training day per week to cap off our endurance work.

Complete for 10 Minutes Total (Including Breaks)

I suggest switching it up, but it is okay if you’d like to continue training just one of the three options below. 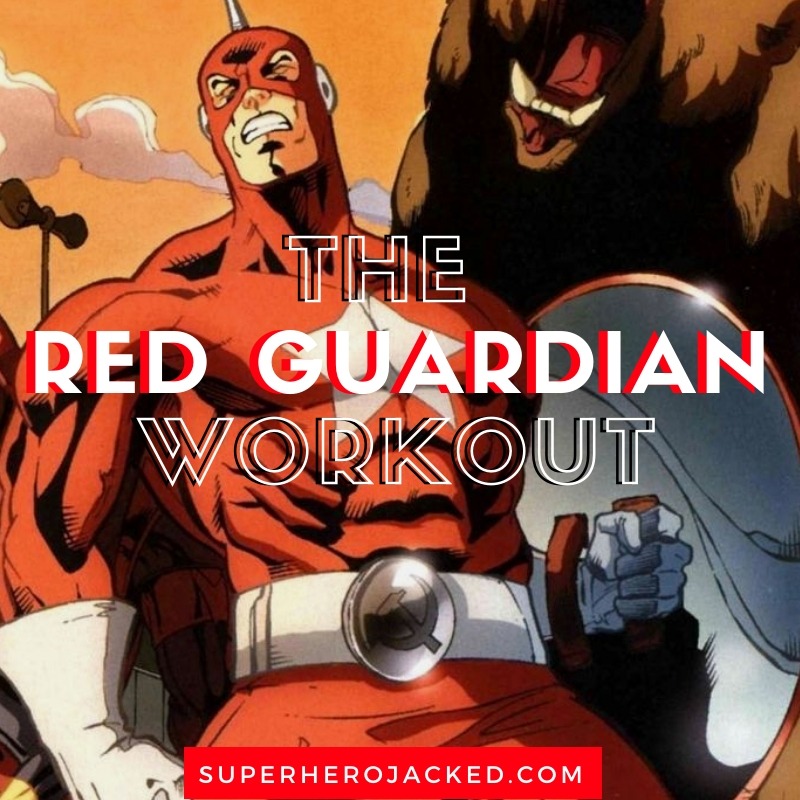