It’s time to get back into some Anime Inspired Workouts

Starting with one that has been requested a ton since we saw a handful of Naruto characters: The Rock Lee Workout!

We got a little sidetracked for a few weeks, seeing DC Characters from Harley Quinn’s Birds of Prey, and then even a long listicle of Young Justice Character Workouts the same week we saw Marvel’s Red Guardian and U.S. Agent; but now we’re back for some more anime.

We’ve obviously seen a good handful of anime in the past, with DBZ Inspired Workouts being the most popular, but right behind that is All Might’s Workout and Deku’s Workout from My Hero Academia, and Naruto, Hinata Hyūga, Sasuke Uchiha, Kakashi Hatake, and Tsunade’s workouts falling not too far behind.

But it seems Rock Lee is a vital piece for our Naruto fans, which is why he takes some precedence in the order we see our next anime inspired characters.

Don’t worry, though, we have more Demon Slayer, Jojo’s Bizarre Adventure and so much more coming.

Rock Lee is a bit taller and heavier than Naruto in both Part One and Part Two.

Although I suppose that’s not very hard..

First and foremost we’ll jump into a bit of a background biography for Rock Lee.

This might shed some light on why Lee is such a fan favorite.

Here’s what his Wiki Fandom tells us:

a shinobi of Konohagakure’s Lee clan and a member of Team Guy. Unlike most shinobi, he lacked the skills necessary to use ninjutsu or genjutsu. However, he overcomes those shortcomings by undergoing special training from Might Guy that would make him a taijutsu master while still a genin.

They continue to move into a bit of a deeper biography, stating:

During his time in the Academy, Lee proved to have no talent for ninjutsu and genjutsu. When he was mocked by his peers because of this, Lee persevered, focusing on taijutsu.  After he succeeded in graduating he was added to Team Guy along with Neji Hyūga and Tenten. During the team’s first meeting, Lee vowed to become a powerful ninja without using ninjutsu or genjutsu. Neji laughed at him, but their sensei, Might Guy, took a special interest in Lee. He encouraged Lee to keep at it and, in time, began teaching him powerful forms of taijutsu.

It’s also nice to make note to the fact that Lee’s personality is told as being “energetic, optimistic, and hot-blooded, and shows the epitome of a nice guy.”

Which definitely sounds like a character I can support.

I also specifically remember him being extremely motivated and never giving up, regardless of what was thrown his way; which is one of the reasons I agree with all our members of The SHJ Army pushing for his routine.

For that reason, I will be including circuits that are quite brutal to train us to keep pushing the way Rock Lee would during his own training.

Digging a bit deeper into his Wiki Fandom they also give us some background on his abilities and physical prowess.

For his ability section they state:

During his time in the Academy, Lee’s performance was looked down upon for his inability to use either ninjutsu or genjutsu. Guy, who sensed in Lee the same hardships and determination he had as a child, took him on as a student, encouraging and training him to help him achieve his dream of becoming a splendid ninja. Under Guy’s tutelage, Lee improves greatly as a late bloomer by Part I; evidenced when he defeated Sasuke Uchiha (a natural prodigy), posed a challenge against Gaara in the Chūnin Exams, and held his own against Kimimaro. As a chūnin, he was capable of defeating the legendary taijutsu master Chen, as well as destroy a meteorite by himself. By adulthood, he had advanced to the rank of jōnin.

They continue to tell us about his physical prowess, writing:

Since discovering he has no talent for ninjutsu and genjutsu, Lee has made it his life’s dream to become a famous ninja who uses taijutsu.  With gruelling training and unwavering support from Might Guy, Lee developed great proficiency in the art, becoming a taijutsu master as a child using the Strong Fist fighting style. Lee’s arduous training has given him strength great enough to unearth a massive tree root from the ground, and speed fast enough to outpace a two-tomoe Sharingan. As per his training, Lee has worn heavy ankle weights, which when removed, increases his speed vastly, enabling him to become the first person ever to bypass Gaara’s Shield of Sand and strike him. He could also intercept a charge from Haku, a shinobi known for his own high speed.  As a chūnin, Lee learned to perform the Leaf Great Gale (木ノ葉大烈風, Konoha Daireppū). In the anime, due to Lee’s extensive training, he has shown to be able to run and fight even while unconscious or asleep, using nothing but pure muscle memory.  As an adult, Lee is considered to be one of Konoha’s best taijutsu users.

So the two things that really stand out about Lee’s abilities are:

Which is exactly what we’ll be focusing on.

We’ll be lifting heavier than we’ve seen most of our other Naruto characters lift, and we’ll also be incorporating speed training as well, while still focusing in on the acrobatic/calisthenic type work that we’ve seen shine through in most of our anime routines.

We will be focusing in on strength and circuit training (remember what I said about never giving up like Lee?) for 4 days a week, which will also help our speed, but then we will also be specifically targeting our speed training 2 days a week, with some extra calisthenics on top.

Friday: Back, Biceps and Circuit Training

**Speed Training and Calisthenics is at the Bottom** 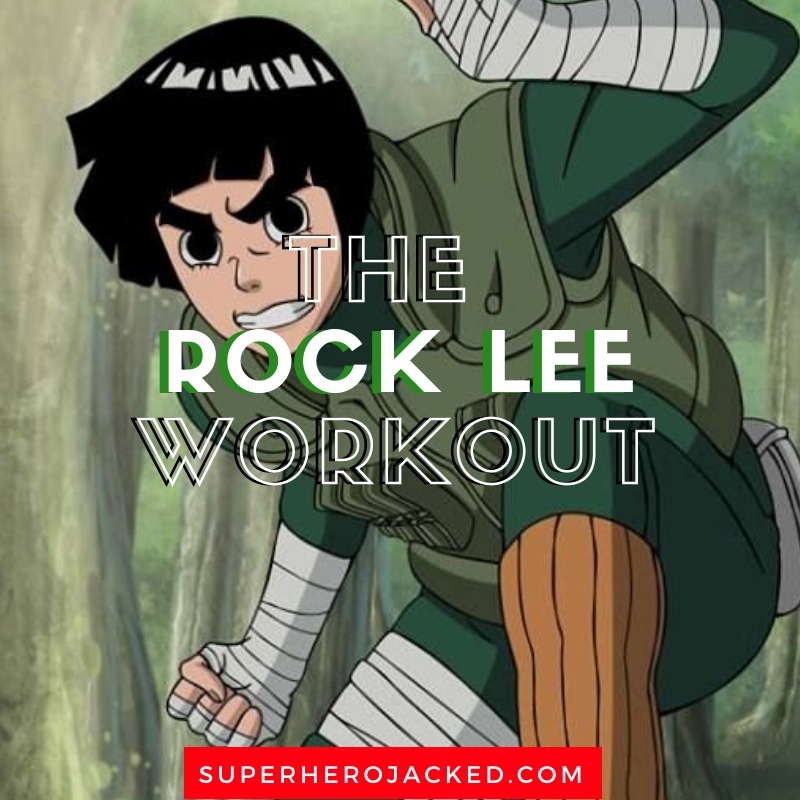