And that’s not just because I follow her on Instagram and like everything she posts so they specifically put her to the top of my feed.

This Zoey Deutch workout is a necessity because this star is making waves and landing herself in role after role.

You could possibly remember her all the way back to her appearances in The Suite Life on Deck or even Ringer, but I think the first time I saw her was in one of her larger movie roles like Beautiful Creatures or Vampire Academy.

From there she’s gone on to star in Dirty Grandpa, Why Him?, Before I Fall, The Disaster Artist, The Politician, Zombieland: Double Tap and so much more!

Like I said, she’s everywhere; she’s making waves in Hollywood.

So I’m sure hundreds of women in our SHJ want to know how she gets her physique.

Zoey Deutch actually comes in at what I’d consider the shortest range among women.

Yes, initial search shows she’s shown as 5’4, but most sources have her anywhere from 5’3-5’4, and let’s face it; a lot of these celebrities add an inch or so to their actual height.

There isn’t much information out there about Zoey Deutch’s exact diet.

Which, if I’m being blunt, usually means that the celebrity in question (in this case I’m obviously referring to Deutch) doesn’t really have a strict set of guidelines.

Especially when there is other information out there in interviews about her health, fitness protocol and other things she’s into.

This shouldn’t be news to us, though, we’ve seen the top diets used among celebrities, and it was pretty obvious that sustainability and allowing for their own intuitiveness generally falls in there somewhere at the top.

Deutch apparently used to be a vegetarian, Teen Vogue states:

It’s a major adjustment for the former vegetarian, who hadn’t set foot in a gym prior to taking on the role.

We’ll see more from this interview when we discuss her workout, but they also mention that during this film prep she was consuming protein packed meals to tone up with the intense training regime she was put through.

It’s important to realize this was during filming for Vampire Academy that was released 6 years ago and this is not the norm.

That being said, Celeb Sizes tells us that Deutch was quoted saying:

She wouldn’t give up eating sugar and salt, so she could look like a supermodel.

Although, the exact quote comes from an interview with Teen Vogue and goes like this:

“I’m not going to give up salt and sugar because I want to look like Adriana Lima,” she says. “But I am going to work out to make myself feel good in my own body.”

Well, regardless of whether or not she’s giving it up, she definitely looks like a supermodel.

So I guess it’s safe to say she didn’t need to sacrifice those things to do it!

From an interview with Deutch New York Post also shares this:

Back at home in LA — where she lives in the Valley with six dogs — she surrounds herself with a core group of girlfriends she’s known since childhood, along with a few actress friends, like Chloë Moretz. Deutch calls herself “the germaphobe, food-eating, momlike, crazy one” of the group.

Which is mostly relevant due to the fact that she calls herself the food-eater.

That being said, her “usual” choices, or “go-to” meals and snacks tend to be fairly healthy, although we have seen her share pictures of her indulging.

Here’s how a source describes her dietary choices:

As for her meals, she eats healthy in a normal way. No special diets. She has oatmeal, sometimes an egg with a toast in the morning. She accompanies this with a fruit. For lunch, she has chicken or pasta with veggies. For dinner, she has chicken or fish with rice. She also loves steak. In nearly every meal she tries has fruits and veggies. For snacks, she likes yogurt and almonds.

Pretty simple.  Which allows for those indulgences that I mentioned.

The food-loving part of this equation.

While it may not seem completely relevant to “workout routine research” side of things for Zoey Deutch, I do want to start by sharing something that she has come out and shared with Women’s Health Mag.

She tells them that she has suffered from anxiety her entire life and she actually uses it as her motivator.

“The first thing I say during a date is, ‘My work comes first.’”

What I’m trying to explain is that she is highly motivated.

She knows how to use a weakness to motivate her to accomplish her goals.

Which is what you can do to accomplish your own fitness goals.

In the interview with Women’s Health, this is the main portion of her discussion about her anxiety (for those of you who find it as useful as I do):

“I came into this world with anxiety,” she told the publication. “I used to hold my breath from anxiety when I was a baby and it would make me faint.”

“There are times when it’s debilitating, and there are times when it makes me laugh, like in the car today when I lost the plot entirely,” she told publication. The plot she’s referring to was her grand interview prep plan: “Get your sh** together and look like a decent human being. Don’t be late. Pee before. Get your hair done.”

Zoey is quick to put a positive spin on her anxiety. “But I actually feel like my superpower is my anxiety,” she told the publication. “It’s one of my key motivators, and it’s at the center of my ambition.”

Her interview prep plan sounds like me looking in the mirror when I start my day.

And I work from home…

In multiple articles (stemming from the same interview) with Teen Vogue, Deutch also shares exercises and training advice that she got while training with Tracy Anderson.

Which is awesome, considering that’s a name we’re familiar with at SHJ.

Tracy Anderson has worked with other women we’ve researched so throwing a plan together on top of what Deutch shares will be easy and awesome!

In the interview Teen Vogue shares this with us:

To get into enemy-slaying shape, Zoey committed to an intense six-days-aweek gym-training schedule composed of boxing, calisthenics, protein-packed meals, and, of course, Kanye West on heavy rotation: “His music is the only thing that gets me through that hundredth sit-up!” she explains with a laugh.

It’s a major adjustment for the former vegetarian, who hadn’t set foot in a gym prior to taking on the role. “I never thought I would become that person who loves working out,” she says. “It sucks while you’re doing it, but the second you finish, it’s like, Wow, I feel great! I’m stronger and much more confident.” Zoey is quick to admit that she never would have reached this point without her training coach, a luxury she knows most teens don’t have. “I wouldn’t have had the tools. Everything out there about fitness seems so extreme. It’s frustrating,” she says.

We saw a snippet of this in her dietary section, but this rounds us up.

Deutch was 18 at the time and training specifically for the role, but I am going to share the exact movements she shares with us, along with other programs that we’ve built around research from Tracy Anderson’s routines.

Please just note that this was one specific film prep and outside of that Deutch does not seem to have any strict training guidelines, although she may train more for specific roles.

Zoey Deutch was working out 6 days a week when preparing for Vampire Academy, but she normally just tends to stay active and make healthy decisions on a regular basis (although she is a foodie).  That being said, if you’d like to step it up a notch and train like her Vampire Academy training I will share extra resources at the bottom to add to this programming.  At it’s core this is a 3 day program which I will be pairing with exercises from Tracy Anderson’s training Zoey specifically shared, and a few other options you can utilize as well.

Here’s something I shared from Kate Hudson’s routine, who also trained/trains with Tracy:

Of course if you can hop into a Tracy Anderson class that would be amazing.

But we’re also lucky enough to have some videos that Tracy has done.

Here’s a couple links you can utilize for an on-the-go workout:

Obviously your best move is going to be to hit the gym and work with a trainer one on one, a sparring partner or even a trainer/coach to guide you threw bag work, shadowboxing, and/or other techniques; even if it’s just to burn calories and have fun.

That being said, I do have some other options for you here on the site.

Grande often tracks her steps, which is a great addition to our Deutch style training. 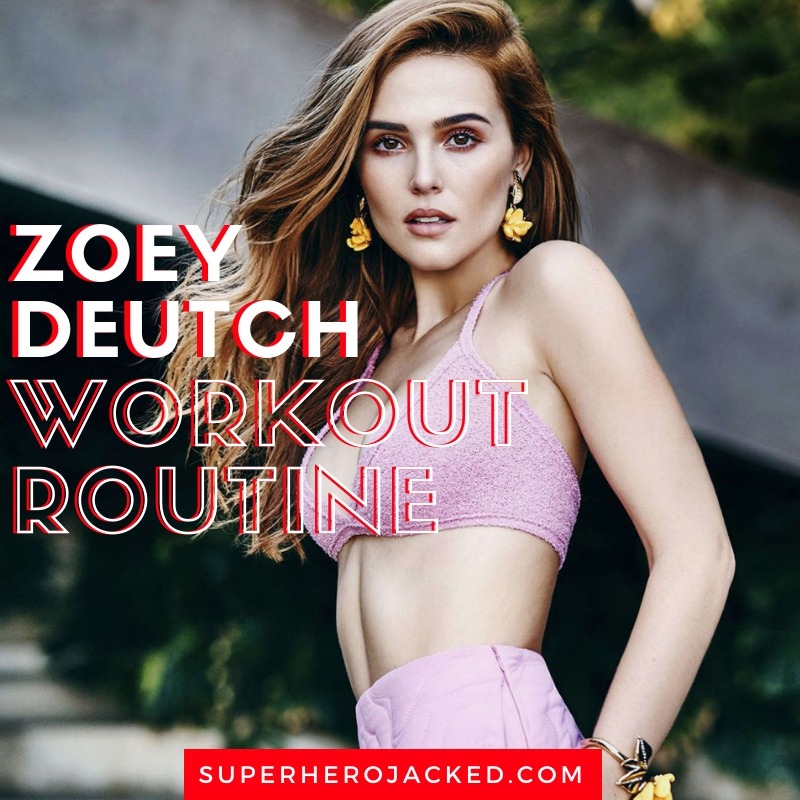