Our Yifei Lui workout is going to be built around the actresses training and dietary guidelines, but we’ve seen Mulan in the past as well.

We have actually seen her at SHJ on more than one occasion.

And we’ve also seen a couple of Yifei Liu’s co-stars, including Donnie Yen’s workout and even Jet Li’s workout this week as well.

Before Mulan, which will make Liu a Disney star forever, Liu was also known for roles in The Forbidden Kingdom, The Assassins, and The Third Way of Love.

Now, Liu gets the role of her career as she takes on the legendary story behind Hua Mulan.

Yifei Liu is actually quite tall.

She’s actually above average height among female celebs; which is taller than Jet Li, and nearly as tall as Donnie Yen!

When I wrote Jet Li’s workout and diet I had a hard time finding specifics into his dietary guidelines.

For that reason I shared some information on a more typical Chinese diet.  If you’d like to learn more about that you can read his article.

That being said, Yifei Liu does share some of her beauty secrets in an interview that we will utilize here.

Here’s some of the tips that MissNews shares with us from the interview:

Of course the last two on that list don’t have to do with her diet, but I figured it would make the most sense to include them on this list being that the last three from the list will be added to her workout routine research section below.

Her beauty secrets aren’t anything new.  We’ve seen this time and time again in our celebrity research.

Other than limiting junk food and making the choice to specifically eat more fruit, Liu’s diet doesn’t seem to be that restrictive.

By the looks of it she eats fairly intuitively, but just makes the decision to turn down the junk food more often than not.

Yifei Liu is no stranger to martial arts.

We need to preface this workout routine research section with that considering her tips aren’t going to specifically make mention to her outside activity in martial arts that would be performed for specific roles.

SCMP shares some interesting information about her casting for Mulan in an article about things we should know about Liu.  They state:

The casting directors went on a year-long search to find the leading actress, looking for someone who could meet three criteria: English-language ability, martial arts skills and, perhaps the most ambiguous of all – star quality. Liu fits the bill. She speaks fluent English, having moved to United States with her mother at the age of 10. She lived in Queens in New York district for several years before returning to China to enroll at the Beijing Film Academy.

Liu may not be formally trained in dance (her mother, Liu Xiaoli was a professional dancer with a performance troupe in the Chinese city of Wuhan), but she has shown her flexibility and agility in martial arts films, such as The Forbidden Kingdom (2008), where she acted alongside Jet Li and Jackie Chan.

I do want to also focus in on that last paragraph.

She isn’t formally trained in dance, but her mother was a professional dancer!

Even more activity to be aware of for Liu.

But now let’s get back to Liu’s beauty advice.

The last three on the list are as follows:

Here’s what Miss News tells us about Liu’s tips for exercising everyday:

This is Liu Yifei’s advice for office girls. According to her, every day, women should spend a bit of time doing exercise exercises like running, jumping rope, and swimming. Because, the movement helps the body maintain firmness, stimulating circulation blood to ruddy skin. On the other hand, when exercising, the body releases sweat to help excrete toxins outside. It can be said that the movement brings many benefits for both physique and skin. If you are too busy, you can spend time practicing at least 2-3 times. Maintaining this habit regularly is the way to help the beauty of Central China always slender and full of life.

They continue by sharing her thoughts on applying muscle relaxants and swimming often:

‘Billion billion gods’ have revealed, so that the body is as gentle and smooth as it is now, she regularly practices dance movements. In addition, Liu Yifei does not forget to train the toughness and flexibility of the body with stretching exercises before going to bed.

As mentioned, physical activity is a good habit to help the body look compact. Liu Yifei’s favorite sport is swimming. She shared: ‘As a child, she was the one who guided me to practice swimming to maintain my health. Until now, I still go swimming with my mother often in my spare time. ‘ In fact, swimming helps to increase the flexibility and flexibility of the body as much as running or cardio.

Alright, so expect a ton of cardio resources, but the main one coming from swimming.

I’m sure our regular SHJ Army members already know what resource we’ll be utilizing for this program.

This program isn’t typical in the sense that Liu recommends exercising everyday being that he exercise is usually in the form of different activities like swimming, running, jumping rope and even martial arts and dance. For that reason I put the volume at 5-7 days per week being that I will be giving you resources for all the different activities you can utilize to continue exercising each day like Yifei Liu!

Monday: Swimming and Stretching/Yoga before bed

Friday: Swimming and Stretching/Yoga before bed

In order to embody Yifei Liu’s training we’re going to need to swim.

Swimming is her favorite form of cardio and activity, and for that reason we’ll be using a specific program that has been shared with us in the past by former celebrities that we can continue to use her.

Celebrity Nathalie Emmanuel who starred as Missandei in Game of Thrones shared a swimming workout that is her go-to, that we still utilize within our workouts!

You can utilize this to start swimming like Yifei Liu!

For your running and/or martial arts days I’ll also be sharing some resources.

For running I’ll give you some levels to go off of, but you can also utilize some other articles as well.

And, for extra resources you can utilize these articles that are “Couch to 5-10k” style training, and also speed training:

Jet Li shared a ton of awesome training tips that you can utilize, but we also have a great selection of resources and programs you can choose from as well.

We don’t actually have a dance class that I can share.

BUT, there are tons of celebrities who like to mix up their training with Zumba if you’re specifically looking to dance for fitness.

If not, taking traditional dance classes is another way to embody Liu’s training.

I also recommend tracking your steps on days you’re not going to be doing some kind of activity (even if that’s hiking or playing sports).

Here are some levels for tracking your steps:

If you’re in decent shape, Level Three should be no problem for you. 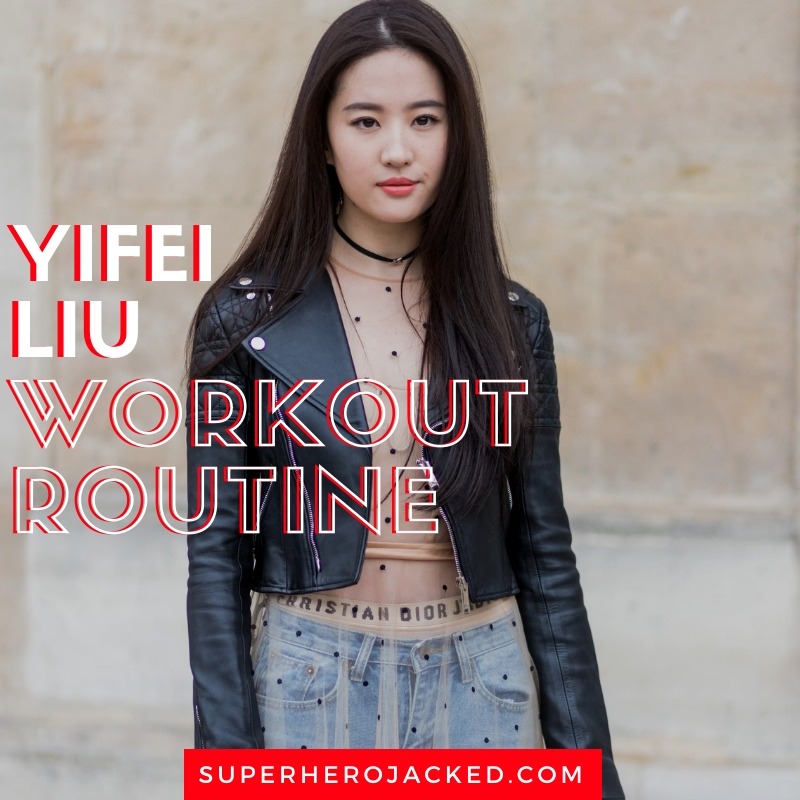