The Tim Drake Workout is falling in with our calisthenics and bodyweight themed weeks.

Which will also land within our Ultimate Calisthenics Workout and Guide.

We have seen A LOT of the Bat family.

But we’ve also seen a bunch of Robin characters as well.

We have had about three different versions of Dick Grayson in the format of a Nightwing Workout, Nightwing Cosplay Workout, and Nightwing Inspired Circuit Workout; and we’ve also seen Jason Todd in the form of a Red Hood Workout, AND Damian Wayne as our actual Robin Workout.

But now we’re finally rounding off our team of Robin characters with Tim Drake.

We’ll also be seeing Bluebird from the Bat family this week as well!

Although he wouldn’t fall into the shortest grouping either.

To start off I want to give some brief biography information for Tim Drake.

I’m sure many of you know Drake and Robin, but I do want to make sure we know which Robin we’re talking about here as we get into it.

Here’s what his Wiki Fandom has to tell us:

Tim Drake is a teen vigilante who once trained under the Batman using the moniker Red Robin, both a reference to the role of Robin and a memorial to the fallen Jason Todd.

And here’s a bit about his origins, from the same Wiki:

Tim was an athletic and popular teenage genius, who sought out new and exciting challenges within everyday life. One such challenge was to find out the secret identity of his local superhero Batman. After crossing the Penguin to get Batman’s attention, Tim’s family was put into witness protection, and Tim used his middle name as his new last name “Tim Drake”.

With the Robin mantle still not filled after the predecessor’s death, Batman finally acknowledged Tim’s skill and offered him the position. Tim declined, however, finding that taking the name of a fallen hero was disrespectful, and chose to act under a moniker known as Red Robin.

Batman trained Red Robin to be a vigilante, and the two worked together for a short time before Tim had a falling out with his mentor and went into a state of semi-retirement.

Which brings us directly into his powers and abilities.

Like much of The Bat Family, Drake is powerless, and works with his incredible abilities to fight crime.

Those abilities are listed as such:

And what I mainly want to focus in on here are a few specific things:

With gymnastics and acrobatics coming in at the top of the list.

Which seems fitting being that we’re working with our bodyweight and calisthenics theme right now at SHJ.

We’re going to be revolving this one around a split we normally don’t utilize with our calisthenics training, but we’ll be doing an upper, low, full body split, with core, holds and cardio in there as well.

I will also be providing Mixed Martial Arts resources available on the site so you can choose to sprinkle them into the routine as you wish.

Plank to Push Up

If you’re going to train like a hero, you may also want to check out some martial arts resources we have on the site as well. 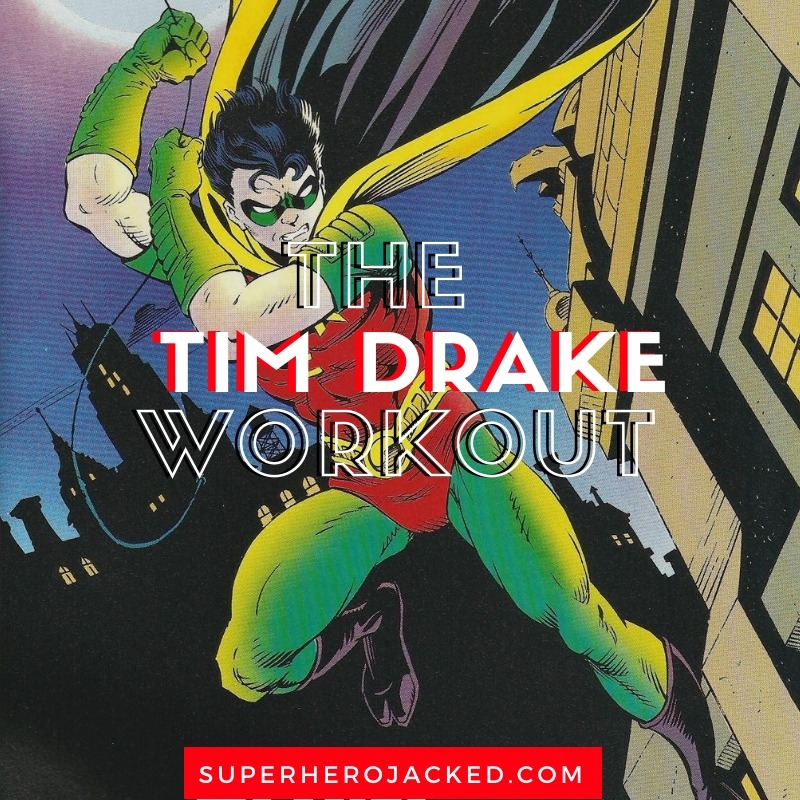