With everyone stuck training from home right now, who wouldn’t want to know Michael B. Jordan’s Top 5 Bodyweight Movements!?

Obviously everyone wants to know.

Luckily for us, Jordan and his trainer put out a video with Men’s Health back in 2018 for his MH Cover Shoot and they talked all about his favorite bodyweight movements.

And, to give you a bit of timeline for that (especially considering the Michael B. Jordan transformation is one that is quite incredible): this was shortly after Black Panther’s release (so he was already jacked), and getting ready for his second take as Adonis Creed in Creed 2.

That being said: we have actually not only seen a Michael B. Jordan Workout Routine before…we’ve actually seen TWO.

We know celebrities adapt their training methods and switch it up often, and Jordan’s was one of the first articles at SHJ to be updated with a second variation to his workout routine.

You can find a list of a handful of other celebrities we’ve given “Version Two” workouts here.

So considering we’ve already actually featured Michael B. Jordan’s Workout Routine and Diet Plan (in depth), you guys can obviously check it out there, and this article will strictly be covering his five favorite bodyweight movements.

But, to have some extra fun with it, we decided to throw them into a circuit format and have Brandon give it a shot.

We’ve seen a couple other celebrity workouts that Brandon has taken a shot at recently to help you guys out at home.

Here’s a list of some recent one that have begun seeing this new format:

But, don’t forget we’re also sticking to a bodyweight and calisthenics training theme on the site as a whole as well.

I wrote up our Ultimate Calisthenics Workout & Guide and since then we’ve been flooding the site with content for everyone stuck at home.

That means: if you’re interested in The Ultimate Calisthenics Workout, tons of resources for bodyweight and calisthenics training, and dozens of other routines you can do from home…you probably want to check out that article as well!

So, naturally, we took these 5 movements that Jordan says are his favorite depending on the training day, and turned them into a circuit to complete that contains all of them!

Here’s a video of Brandon doing the circuit to give you an idea of how it goes:

One Day (To Be Repeated)

This routine is made up of Michael B. Jordan’s Top 5 Favorite Bodyweight Movements.  We took his Top 5 and turned them into one circuit!

Brandon does 5 in the video for testing, but it can be easily scaled down to 3. 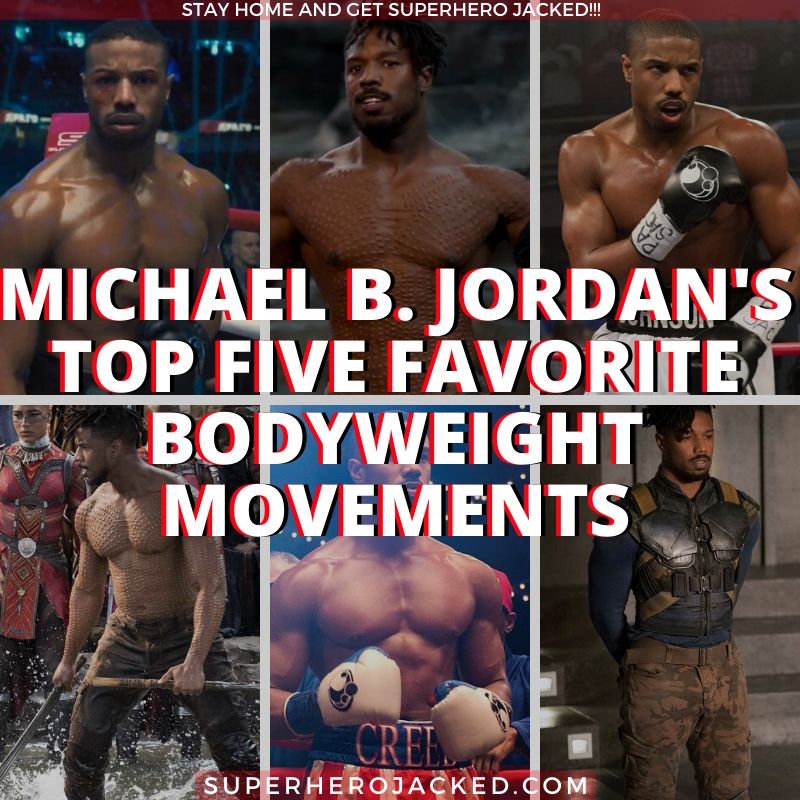