Who wouldn’t want to train like a ripped boxer?

Ryan Garcia’s workout routine and diet plan has been one that has been requested numerous times, but we generally stray away from boxers workouts strictly because of the variety that you won’t be able to get while training on your own.

That being said, oddly enough, we have seen Mike Tyson’s home workout routine recently, and now we’re given the opportunity to train like Ryan Garcia from home as well.

While everyone has been stuck at home with gyms closed we have been focusing in on calisthenics training and home-based workouts; even publishing our Ultimate Calisthenics Workout Routine & Guide which has all the resources and workouts from all over the site, on top of the ultimate workout (which scales up with five different levels).

Now we’re lucky enough to have the chance to use a power workout (home based) that Ryan Garcia has been nice enough to share.

But first we’ll start with some more information about Garcia, his nutrition, and some other workout routine stuff.

Ryan Garcia is below average height when compared to other celebrities we’ve seen at SHJ.

But he is actually a bit taller than I originally thought.

It’s important to recognize that the diet of a boxer (or fighter, for that matter) is going to be much different than other diets we are used to seeing at SHJ.

And, as you can see above, Garcia walks around at around 155 lbs. on a regular basis, which means he cuts down to make weight, as fighters and boxers do before their fight.

In a recent interview with Garcia and his nutritionist (who he recently began working with), Bibi Garcia, they’re quoted stating:

“My lips were dry as (expletive),” Ryan Garcia said.

“That’s from lack of fat. Good fat,” Bibi Garcia said. “He was dehydrated. His color was off. He didn’t have his rosy cheeks.”

“Before my last fight, I couldn’t even hit the cobra bag,” he said as he threw several punches in his garage, converted into a boxing gym. “I was dead before weighing in.”

Bibi, who has worked with other professional fighters including Brandon “Bam Bam” Rios, said she’s implemented “proper nutrition” including a steady dose of multivitamins, to Ryan’s diet and has him cutting weight “properly.”

“Dehydrating before a fight causes the body to shut down,” Bibi said. “This is my dream to be able to work with fighters and help bring their bodies back to health by rehydration for proper weight cuts. When I’m with my fighters I get to know them to see how their bodies fire. I’m constantly with Ryan. I probably ask him 100 times a day, “How are you doing” to the point where I probably drive him nuts.

But things are much different around weigh-in time than they are regularly.

Once Ryan weighs in, he will have one thing on his mind — fettuccine alfredo. That is his go-to meal the day before a fight once he’s tipped the scales.

However, there will be a slight change in his post weigh-in meal Thursday afternoon.

“I won’t change what has been working for him. I need to have him happy. If fettuccine alfredo after a weigh in is his ritual, more power to him,” Bibi Garcia said. “He’s just going to eat it differently. We are going to cut it in small pieces and he’s going to eat slower. Because if he eats it fast, with the way I’m feeding him now, he’s going to get sick.”

So, overall Garcia and Bibi are working on making this new form of diet sustainable for him so that it is more efficient and allows him to still take advantage of all his skills, instead of drying him out (so to say).

One thing needs to be clear for this one: the workout routine we’re sharing below is one directly from Garcia that he is using to train for power from home during quarantine.

In this section we’ll discuss other things he does throughout his training that we find via research.

If you’d like, you can combine both to form a full mixed martial arts/boxing styled routine.

If you don’t know Ryan Garcia, you probably should.

He has six million followers on Instagram and he is 20-0 with 17 of his wins coming from knockouts.

I also make specific mention to his Instagram because he posts a ton of training videos that are useful if you’re looking to really take on his level of training.

One thing you will notice is his focus on:

So if you want to step it up you’ll like (if this wasn’t obvious enough) need to begin working in a boxing gym, with a trainer, and have sparring partners.

That being said, we will do our best to let you train LIKE a boxer.

For the actual workout Garcia shares with Men’s Health we’re going to need resistance bands, and a BOSU ball.

Here’s what Garcia has to say about his current training regime:

“Adjust to your surroundings, because the world don’t wait for you,” he says. “Just like Bruce Lee said: You need to be like water. Water goes into a cup, it turns into the cup. Water goes into anything, it becomes that. That’s what you need to do when you’re working out, and for anything in life. Just keep adjusting.”

One Day of Training (To Be Repeated)

This is how Ryan Garcia is currently training for power without a gym.  Garcia and his trainer shared this workout with Men’s Health.

Plank Position Side To Side (Leg Kicks): 10 reps per side 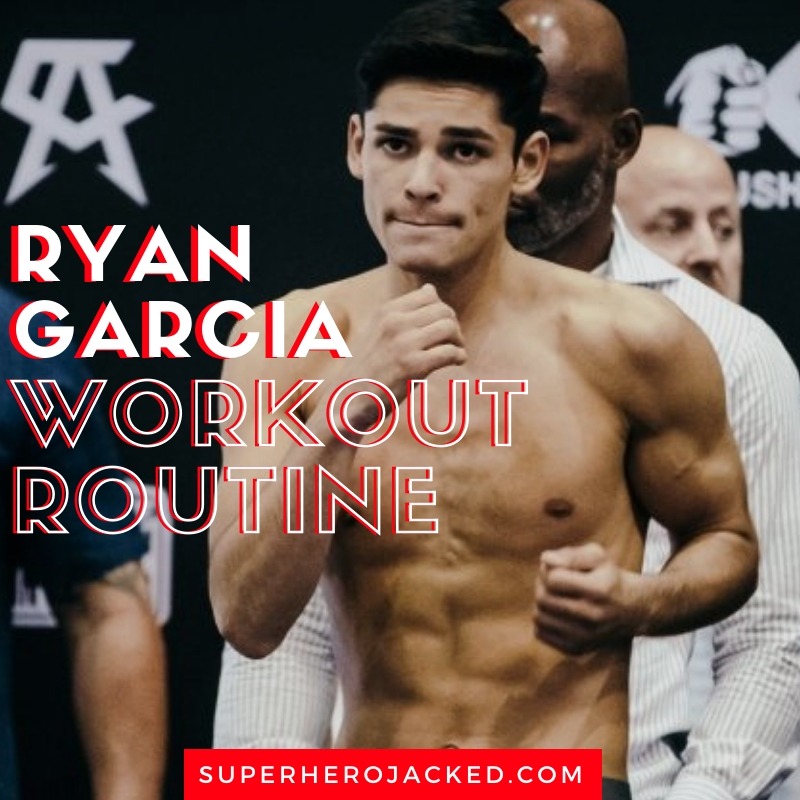