We have actually seen a few other Fairy Tail characters already, so it’s a little strange we’re just now getting our Natsu Dragneel Workout!

As I mentioned in our Gon Workout this week (Hunter X Hunter), The SHJ Army has been loving our Anime Workout Routines.

We even added our Top Ten Dragon Ball Z Workouts and Top Ten My Hero Academia Workouts to our workout routine listicles last week to make it easier to go through our Workout Database.

But if you’re in the search of Fairy Tail Workouts specifically, we also have our Erza Scarlet Workout, Gray Fullbuster Workout and Lucy Heartfilia Workout as well!

Although we have seen some anime characters who are much shorter; so we’re used to it by now.

To get us started, here’s a little bit of information about Natsu Dragneel from his short bio on his Wiki Fandom page (which we’ll be using to pull the information needed to build this entire routine):

Natsu Dragneel is a first generation Slayer Fire Dragon Slayer and the captain of Team Fairy Tail. He is the younger brother of Zeref Dragneel, who had died originally 400 years ago, having been revived as Etherious and become the former Tartar leader as END (Etherious Natsu Dragneel). Fairy Tail Warcraft Age and the love interest of Lucy Heartfilia

Natsu also has a TON of powers and abilities.

For this one we’ll actually be revolving the routine around both his strengths (powers and abilities) and his overall aesthetic and appearance.

As you can tell by his pictures (and of course if you’ve watched the show), Natsu has six pack abs and a tone of toned muscles.

So we have our work cut out for us…

Natsu is a lean, muscular young man of average height with a slightly tan skin tone, black eyes, spiky pink-colored hair, and has abnormal sharp canines; Natsu has a scar on the right side of his neck, hidden by his scarf. He also has a cross-shaped scar on the left side of his abdomen, a result of the two fatal wounds dealt to him during his several altercations with the Rogue Cheney of the future. Natsu’s guild mark is red and is located just below his right shoulder.

Lean and muscular sounds about right.

That’s what we’ll be shooting for here.

As for the fun part, Natsu Dragneel’s powers and abilities, his main ability comes from his Fire Dragon Slayer Magic.

If you want to see all his magic and more about his Fire Dragon Slayer Magic (and Demon Form, for example), his Wiki page has a ton of information.

Being that I’m unable to teach you any magic (I do wish I could, though), we’ll be working with his physique as I said, and also his other abilities, which his Wiki describes as such:

Master Hand-to-Hand Combatant: Natsu is an extremely proficient unarmed fighter, often using his Dragon Slayer Magic in combination with punches, kicks, elbows, and even headbutts, to combat his opponents to great effect. Such skill is paired with amazing physical prowess: aside from his strength, Natsu has displayed high degrees of speed, agility and reflexes, enough for him to match melee-specialists of Paladin-level in battle.

Immense Strength: Natsu has shown on numerous occasions to possess a very high degree of strength, enough for him to perform a number of physical feats, among which are freely swinging around the mast of a ship as a makeshift weapon, doing the same with a palm tree he personally broke, bare-handed, shattering a billiard table and cracking most of its balls simply by hitting one of them with the cue, and stopping the gargantuan Dorma Anim’s foot, which was going to crush him and his fellow Dragon Slayers, all by himself, subsequently throwing the robotic Dragon off balance by rapidly pushing it away. Furthermore, he was capable of battling both Sting Eucliffe and Rogue Cheney, alone, while they were in Dragon Force, easily overpowering the two with his sheer physical strength.

Enhanced Speed: Natsu’s speed and reflexes are impressive, enough for him to close great distances in a blink of an eye and dodge swift attacks. It was shown that Natsu’s body is able to almost immediately react to anything that would attempt to attack him, and with his numerous experiences fighting against opponents in his muscle memory, he is capable of countering with forms and attacks almost instantly, something that many recognized immediately after they lost their fight to him.

Enhanced Reflexes: Natsu possesses fast reflexes, having been capable of dodging attacks from Erza, Laxus and, most recently, attacks from Sting.

Enhanced Agility: Natsu’s agility, balance, and bodily coordination are all enhanced to levels that are far beyond the natural physical limits of the finest human athlete.

Immense Durability: Natsu has proven himself to be incredibly durable. He has managed to take continual, deadly assaults from foes and continue fighting. Such impressive resistance was first shown during his battle with Erigor, in which he received wounds from his opponent’s strong, sharp wind, and kept fighting on, nonetheless. Also, during his fight with Cobra, Natsu displayed a natural resistance against the Oración Seis’ member’s poison, described as lethal and corrosive. A true testament to his durability was shown when he blocked one of Sting Eucliffe’s strongest attacks, Holy Nova, with a single hand, and emerged completely unscathed from the enormous explosion that followed the impact.

Immense Endurance: Natsu’s physical stamina and endurance is extremely large, as he has been shown to fight multiple opponents at once without resting, and remain active for an entire day even when at low strength.

Which means we’ll definitely be having a nice mixture of strength training, speed training, and even endurance training.

To become Natsu we’re going to be training roughly 5 or so days a week, contingent on how much extra training you want to add in with the add-on programming I provide.  I’m giving 3 days devoted to strength training and then I recommend adding in speed and endurance work on top of that; although all of our parkour workouts have great calisthenics work that can be added in as well. 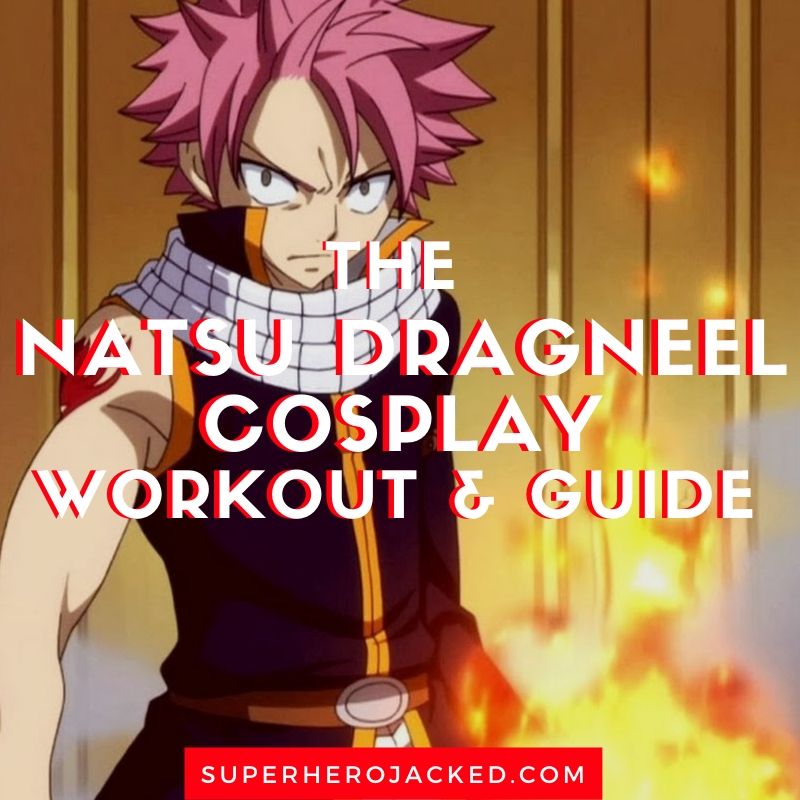